Kangana Ranaut ‘Shouldn’t be This Blind’, Diljit Dosanjh Lashes Out at Actor For Tweeting Against Old Woman From Farmers’ Protest in Delhi

Actor Kangana Ranaut recently made a tweet misidentifying the old farmer woman as the Dadi from the Shaheen Bagh protest. Diljit Dosanjh now criticised the actor for 'saying anything'.

After actor Kangana Ranaut got a legal notice for making a wrong tweet about the elderly Sikh woman from the ongoing farmers’ protest in Delhi, actor Diljit Dosanjh also criticised her in a tweet and tagged her. She had made a tweet misidentifying the woman in the protest as Bilkis Dadi, the other elderly woman who became popular for participating in the protest of the Shaheen Bagh that happened earlier this year. Also Read - Kangana Ranaut’s Thalaivi Gets Postponed Due to Rise in COVID-19 Cases

Kangana made a derogatory tweet and mentioned that the same woman who was at the Shaheen Bagh protest was present at the Delhi protest also and she’s ‘available in 100 rupees’ She deleted the tweet later. Also Read - Shehnaaz Gill Turns Sardaar as She Wears Turban Inspired by Diljit Dosanjh - Photos 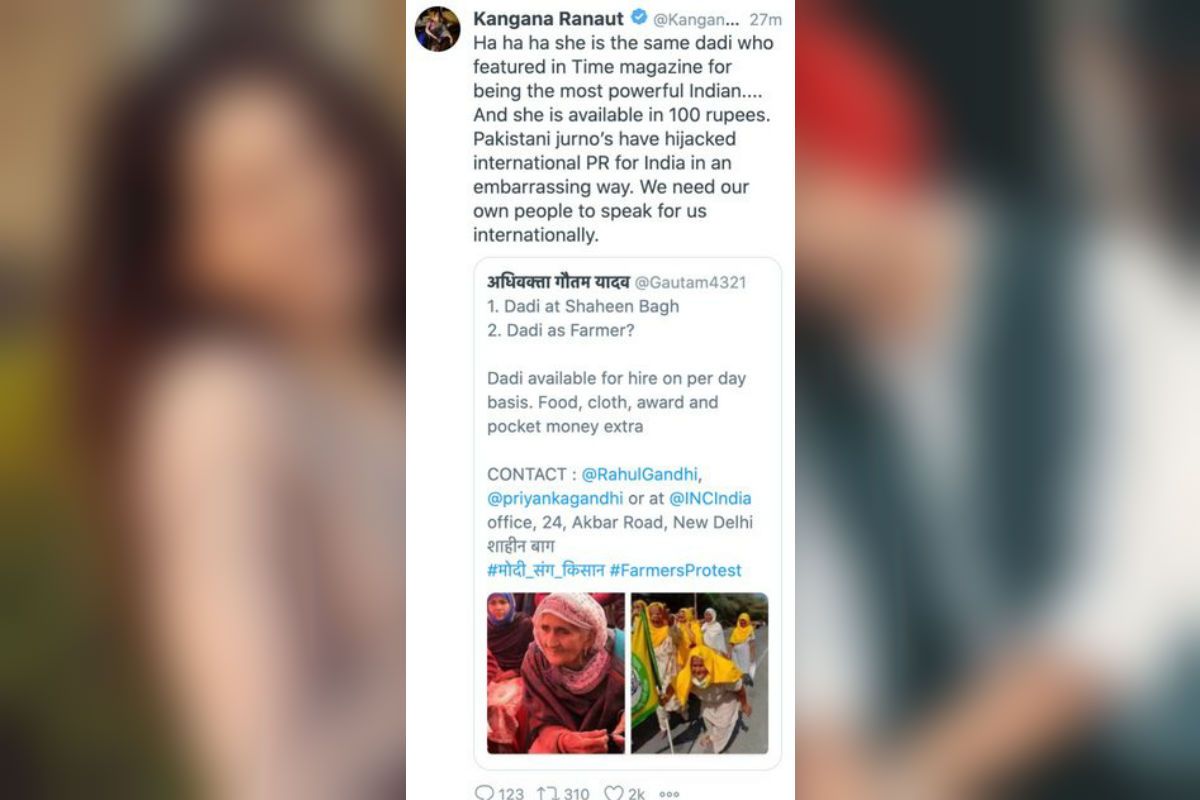 Diljit, posting a video of the elderly woman named Mahinder Kaur, called out Kangana and mentioned how people should think before speaking or writing anything. He slammed the actor saying she ‘says anything’ and that she ‘shouldn’t be this blind’. Also Read - Kangana Ranaut Says Akshay Kumar Called Her Secretly to Praise Thalaivi, Fans Are Rolling Their Eyes!

After Kangana’s tweet went viral, Kaur, who was speaking to the BBC about participating in the protest, said that the actor should come and spend a day in the field. She said, ‘we will give her Rs 100 in the evening’ if she comes to work with us in the field to know what a farmer has to do.

In the legal notice sent to Kangana, the actor has been asked to render a public apology and be cautious before making tweets. “It is to inform you that the said lady is not a fake lady. Her name is Mahinder Kaur and she belongs to Bathinda. She is the wife of farmer Labh Singh Nambardar. She in her life, has always remained connected with fields and filed work and she is the wife of a farmer,” the notice read.