Kangana Ranaut Calls Taapsee Pannu Calls Her 'Rapists Ka Feminist' Over Her 'Not So Sasti'Tweet!

Kangana Ranaut has now reacted to Taapsee Pannu’s ‘Not So Sasti’ tweet. Taking a dig at Taapsee over the ongoing tax invasion case, the Queen actor wrote, “You will always remain sasti because you are sab rapists ka feminist… your ring master Kashyap was raided in 2013 as well for tax chori… government official’s report is out if you aren’t guilty go to court against them come clean on this … come on sasti.”Also Read - Bhool Bhulaiyaa 2 Roars at Box Office as Dhaakad Shows Get Cancelled - Sad News For Kangana Ranaut! 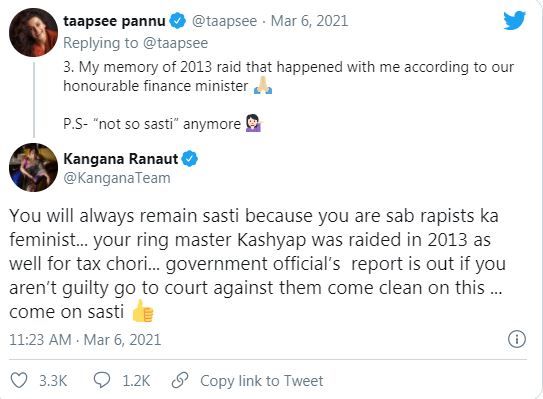 Earlier today, Taapsee had shared, “3 days of intense search of 3 things primarily 1. The keys of the “alleged” bungalow that I apparently own in Paris. Because summer holidays are around the corner. 2. The “alleged” receipt worth 5 crores to frame n keep for future pitching coz I’ve been refused that money before 3. My memory of 2013 raid that happened with me according to our honourable finance minister P.S- “not so sasti” anymore.” Also Read - Watch: Kangana Ranaut on Not Doing Item Songs, Endorsing Fairness Creams, And Speaking on National Issues | Exclusive

3 days of intense search of 3 things primarily
1. The keys of the “alleged” bungalow that I apparently own in Paris. Because summer holidays are around the corner

However, Kangana even reacted to the alleged tax invasion case earlier and tweeted, “They are not just #TaxChor huge transactions of black money has happened, did they get that money for provoking #Shaheenbagh riots or #republicdayviolence… From where the black money came and where did they send the black money which isn’t accounted for?” Also Read - Kangana Ranaut Hails Bhool Bhulaiyaa 2 Box Office Success, Congratulates Kartik And Kiara For Ending Dry Spell

Meanwhile, the investigating agency released a statement that read, “During the search, evidence of huge suppression of income by the leading Film Production house compared to the actual box office collections has been unearthed. The company officials have not been able to explain the discrepancy of around Rs. 300 crore. Evidence related to manipulation and under-valuation of share transactions of the production house amongst the film directors and shareholders, having tax implication of about Rs. 350 crore has been found and is being further investigated. Evidence of cash receipts by the leading actress amounting to Rs 5 crore has been recovered. Further investigation is going on.”