Kangana Ranaut and her sister Rangoli Chandel visited the Bandra police station in the sedition case on Friday morning.

Actor Kangana Ranaut and her sister Rangoli Chandel were clicked at the Bandra police station in the sedition case. The sisters were accused of spreading communal hatred and disrupting harmony with their statements and tweets on social media. Both Kangana and Rangoli are dealing with legal cases for making derogatory comments against the film industry and speaking against the Maharashtra Chief Minister Uddhav Thackeray. On Friday morning, Kangana visited the police station with her sister and waved to the media and her fans who were stationed outside to get her glimpse.Also Read - Sedition Case: Kangana Ranaut, Rangoli Chandel Move Bombay High Court To Quash FIR Against Them

Earlier on the same day, she released a video asking all to support her in her fight for freedom. The actor said that both she and her sister have been attacked multiple times for speaking the truth and for taking a stand against the right. A furious and disappointed Kangana can be seen asking her fans to extend their support when there are so many legal cases filed against her and her sister. Also Read - Sedition Case: Kangana Ranaut, Rangoli Chandel Seek Time Till November 15 To Appear Before Mumbai Police

Mumbai: Actor Kangana Ranaut and her sister Rangoli appear before Bandra Police to record their statements, in connection with a sedition case pic.twitter.com/ACkLgBXARA

An FIR was registered against Kangana and her sister after the Bombay High Court ordered the same following  Bandra Metropolitan Magistrate JY Ghule’s order in the case. One Munawwarali Sahil Sayyed filed a complaint against the sisters and accused them of spreading hatred against their own film industry, its people, and others on social media and through their interviews. The complaint mentioned that Kangana allegedly brings in religious issues in her tweets and tries to encourage communal hatred in society.  It also included the infamous tweet in which the actor compared Mumbai with Pakistan Occupied Kashmir and got involved in an ugly war of words with Shiv Sena leader Sanjay Raut. 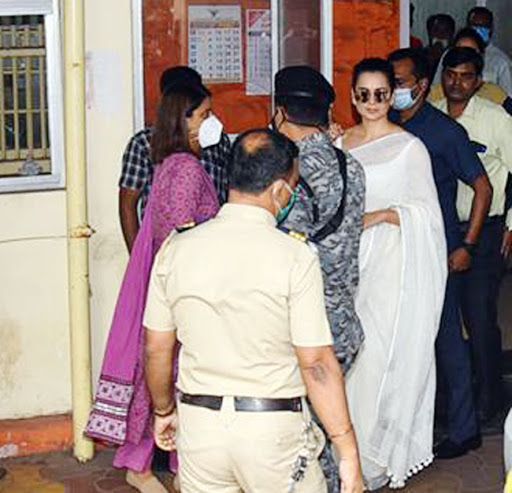 In October, the actor reacted to the sedition case against her and said that the Maharashtra government was ‘hell-bent’ on sending her to jail. She wrote, “I worship people like Savarkar, Neta Bose and Rani of Jhansi. Today the government trying to put me in jail that makes me feel confident of my choices, waiting to be in jail soon n go through same miseries my idols were subjected to, it will give a meaning to my life, Jai Hind Folded hands.”