The stellar filmmaker turned 47 years on Saturday and as his industry friends poured out their love and wishes on his successful day, one wish seemed exceptionally special for Karan Johar. It was from the international designer Prabal Gurung, Karan’s Nepalese-American friend who is credited with dressing celebrities including Michelle Obama, Demi Moore and Oprah Winfrey. Also Read - Ajeeb Daastaans Trailer: Love, Lust, Homosexuality And More - Digging What Society Buries Underneath!

On Karan’s birthday, Prabal took to his Instagram handle to post a birthday wish which read, “Pyaar Kiya To Darna Kya. Happy birthday KJo” (sic). While fans read in between the lines, the picture showed Prabal dressed in a funky blue shirt with green floral prints knotted at the waist, paired with grey trousers and white sneakers as he pouted for the camera with Karan clinging onto him from the upper stair, dressed in a green jacket and blue tracks. Also Read - Karan Johar Plays Bollywood Style Holi With Roohi, Yash, All Wear White Kurta - Photos

The two celebrated Karan’s birthday in New York at The Boom Boom Room, a hotel in NYC’s district. While the post sparked off their dating rumours, Karan’s comment on the post read, “Control yourself bhaiya!” punctuated with laughing emojis. 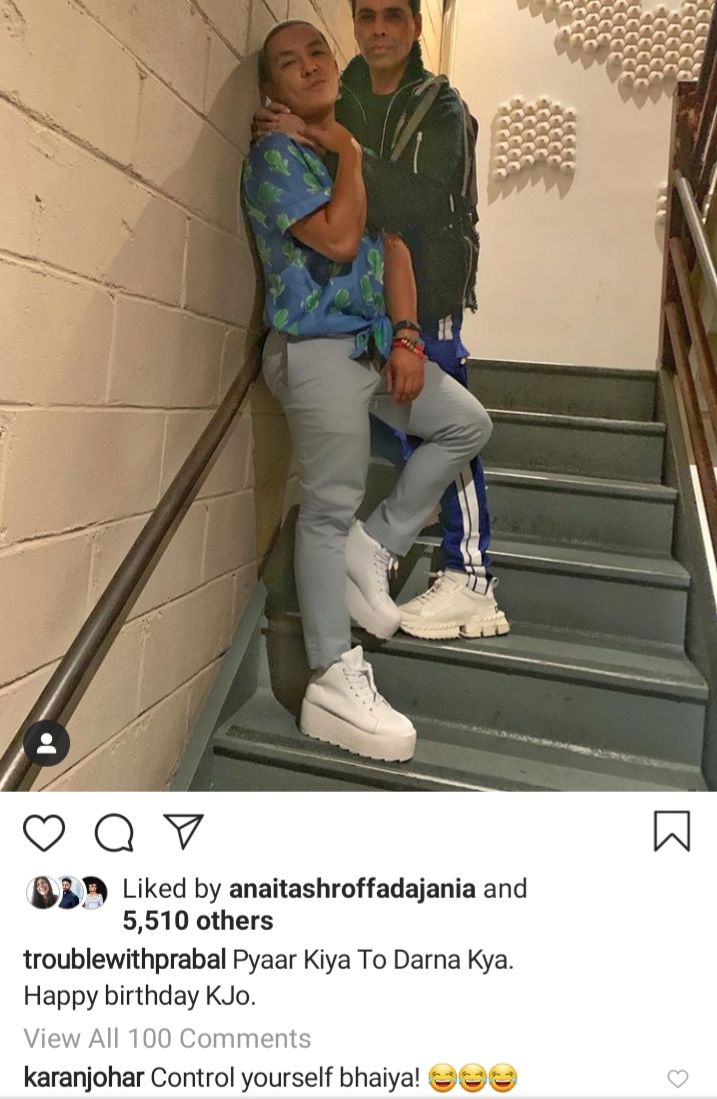 On the professional front, Karan Johar‘s upcoming film Takht might not just release on its scheduled date. Rumours are rife in Bollywood grapevine that the pre-production work on the film isn’t complete yet and that has pushed the release date of the film. A report in an entertainment portal revealed that Karan might eye a Diwali 2020 release for his magnum opus Mughal drama as opposed to an early 2020 release that was decided earlier.

Directed by Karan Johar and produced by his home banner Dharma Productions, Takht features Kareena Kapoor Khan, Ranveer Singh, Alia Bhatt, Vicky Kaushal, Bhumi Pednekar, Janhvi Kapoor, and Anil Kapoor among others in important roles. It brings back KJo on the director’s seat after a hiatus of four years. His last directorial was Ae Dil Hai Mushkil which was released in October 2016.