Mumbai: After Cristiano Ronaldo kept aside two bottles of Coca-Cola at a Euro 2020 press conference and rather endorsed water bottles, several hilarious memes are being shared on social media. Now, even the Bollywood diva Kareena Kapoor Khan has joined this meme fest as she recalls an iconic dialogue from her movie Jab We Met.Also Read - Kareena Kapoor Khan Shares Glimpse of Her Intense Morning Workout And It Will Motivate You To Stay Fit

Kareena Kapoor Khan took to social media sharing a meme that featured her 2007 film Jab We Met’s character Geet. It is from a scene where Geet is telling a shopkeeper at a railway station, “Cola-shola sab apni jagah hai, par paani ka kaam paani hi karta hai (nether Cola nor Soda can quench one’s thirst like water does).” Sharing the meme, Kareena dropped a couple of emojis. Also Read - VIDEO: Cristiano Ronaldo's Gesture Towards Airport Staff Proves he Has a Heart Worth Gold 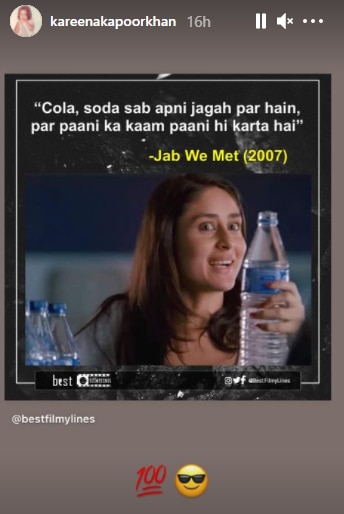 Meanwhile, Boycott Kareena Kapoor Khan was trending on Twitter and social media was flooded with people expressing anger against the actor after she allegedly asked for a whopping Rs 12 crores for the upcoming mythological period saga Sita. Netizens alleged that Kareena hurt religious sentiments. Apart from this, Bebo has also been repeatedly sharing information on her social media accounts regarding the coronavirus outbreak. In April this year, she urged her fans to get vaccinated via proper online registration. She also expressed disappointment over people who don’t understand the ‘Gravity of the situation’.

On the work front, Kareena will be seen next in Laal Singh Chaddha opposite Aamir Khan. The movie is a remake of Forrest Gump, Tom Hanks’ 1990s movie.