Actors Kareena Kapoor Khan and Saif Ali Khan have come under the scanner after they stepped out in Marine Drive with their son Taimur Ali Khan after three months in lockdown at their home. However, they came under the scanner for taking their little son out of the house and Saif for not wearing the face mask. During their leisure walk, the power couple of Bollywood were warned by the enforcement officer that they are not allowed to bring children of the home yet. Also Read - Mumbai Police Releases Official Statement in Sushant Singh Rajput's Suicide Case, Mentions Sanjay Leela Bhansali

A video is surfacing the internet where the cop can be heard saying ‘chhote baccho ko bahar nahi lana hai’ (Bringing out kids is  not allowed’. The moments later, Saif can be seen pulling his mask over his mouth as Taimur sits comfortable on his shoulder. They can be seen heeding to cop’s advice but their response and carelessness did not go well with the netizens. Also Read - Dil Bechara Trailer Out: Sushant Singh Rajput, Sanjana Sanghi's Film is Emotional Ride of Romance

Applauding the cop, netizens question that why they have not given a mask to the nanny. One user wrote, “Me glad d cop said it to them.” While the other wrote, “Why does the maid not have a mask on? 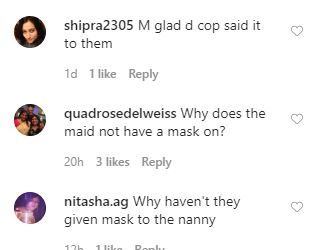 Earlier, the couple were trolled mercilessly after their pictures and videos surfaced the internet for not following the safety measures during COVID-19 Pandemic.