Actor Kartik Aaryan was clicked by paparazzi at the Mumbai airport. He has been shooting for his next film, tentatively titled as Love Aaj Kal 2, with Sara Ali Khan in Delhi. At the airport, he fulfilled the wish of his fans by taking a selfie. But, it wasn’t just a normal process of taking a selfie. Also Read - Dhamaka Teaser Out: Don’t Miss Kartik Aaryan’s Impeccable Performance as Righteous News Anchor, Watch

A part of Kartik’s fan following also includes kids. As Kartik walked out of the airport, two kids rush to him and requested for a selfie. Kartik bent down and posed with them. However, seems like the little fans weren’t happy with the picture that came out and they demanded to be clicked again. As can be seen in the pictures, Kartik didn’t refuse their request. This time, he himself held the camera, bent down and took a selfie. He repeated the process with one of the kids who wanted to have a solo picture. Well, kids can be demanding you see! Check out the pictures here: Also Read - Kiara Advani in Rs 2,27,500 Black Sequin Lehenga Exudes Charm For Award Ceremony 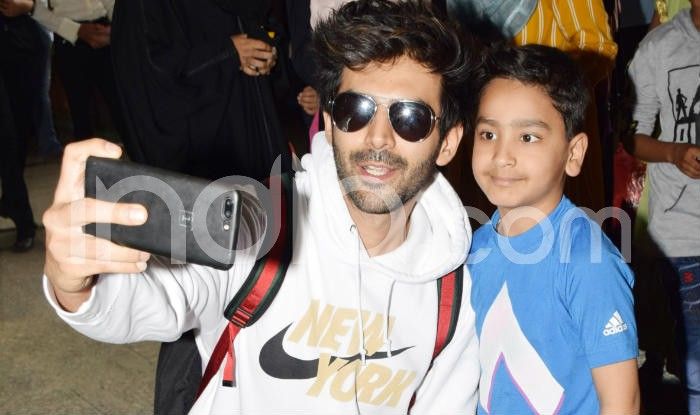 Also Read - Dhamaka: Kartik Aaryan Starrer To Premiere on Netflix? Here's What We Know So Far!

Kartik’s fan following has seen a tremendous rise after the release of his last year’s release Sonu Ke Titu Ki Sweety. The film was one of the biggest grossers of the year 2018. This year as well, Kartik began with a bang and featured in Luka Chuppi with Kriti Sanon. The romantic comedy is still running in theatres and has already been declared a hit. Recently, he also appeared on popular chat show Koffee With Karan, proving that whether it’s about taking over the screens or maintaining his professional relationships with others in the industry, he is here to stay.

Meanwhile, neither he nor Sara have confirmed their association with Love Aaj Kal 2. However, the leaked pictures and videos from the sets of the film are certainly speaking for their chemistry. In a viral video, the two actors were seen sharing a passionate kiss for a scene. In a few pictures that went viral on social media, Sara and Kartik were seen indulged in a conversation on the sets. Kartik though questioned the veracity of the viral video. He said ‘were they really us?’ when asked to comment on the video.