Katrina Kaif Shares Long Post Over Rohit Shetty's Controversial Statement. Says, 'It Was Out of Context And he Was Entirely Misunderstood'.

Actor Katrina Kaif, who is gearing up for the release of her upcoming film Sooryavanshi, has finally broken her silence over Rohit Shetty’s controversial statement where he clearly stated that ‘no one will look at Katrina as the shot has Ranveer Singh, Ajay Devgn and Akshay Kumar in one frame. The Sooryavanshi director has been receiving flak on social media and soon ‘shame on Rohit Shetty’ started trending on micro-blogging site Twitter.Also Read - Sooryavanshi Director Rohit Shetty Gets Trolled For His Comment on Katrina Kaif, Faces Backlash on Twitter

Taking to Instagram stories, she shared a long post where she defended Rohit and stated that the director was taken ‘out of context and has been entirely misunderstood’. She further cleared the air saying that he meant that no one will notice her ‘blinking’ as there are four people in the frame and bomb blast is happening. She also reveals that despite that they took another shot. Also Read - Vicky Kaushal-Katrina Kaif Look Inseparable at Isha Ambani's Holi Party - These Videos Are Proof

The statement reads, “Dear Friends and Well-wishers… I normally do not comment on media reports or articles… But in this case, I feel a comment made by Rohit Sir, has been taken out of context and is been entirely misunderstood… I am referring to the comment as reported that Rohit Shetty said “No one would look at me in the frame, as there are three boys there and a blast happening”, this is not what was said. I mentioned that I had blinked in the shot, and Rohit Sir said, there are four people together in the frame and a bomb blast happening, no one will notice you BLINKING. Even inspite of that, we still did one more take. I share a very warm equation and friendship with Rohit Sir and have always enjoyed our discussions on everything from Cinema to my character and more importantly, he has always been there as a friend for me. This has been taken entirely taken out of context… Hope you all have a great day.” Also Read - Holi 2020 Started Early For Bollywood Celebrities, Nick Jonas, Priyanka Chopra Pose With Katrina Kaif at Ambani's Holi Bash- Watch Inside Videos 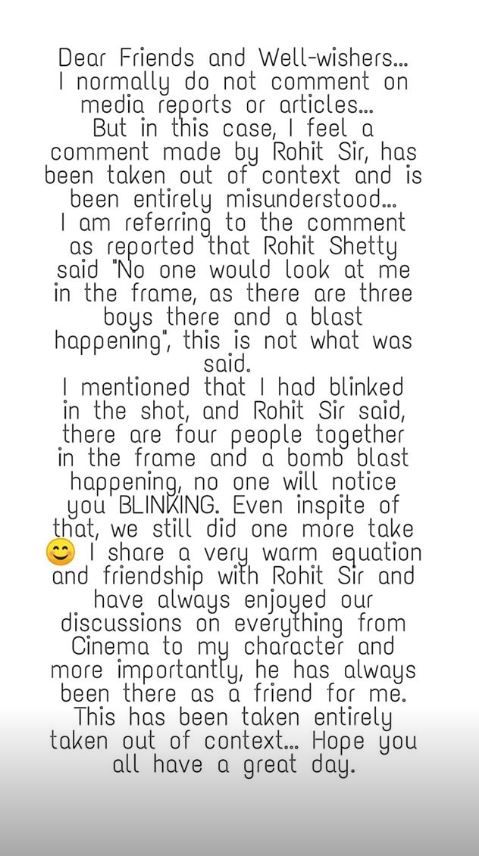 It all started when Rohit Shetty was talking about the climax scene starring Akshay Kumar, Ajay Devgn, Ranveer Singh and Katrina Kaif. “You have to watch the take thrice. The scene with the blast has Katrina (Kaif) too. If you look closely, she is blinking (during it). After the fourth take, she came to me and asked: Can we take one more? And I said, ‘Katrina, I will tell you honestly, no one is going to look at you.’ She got so wild. She said, ‘how could you tell me this?’ and I said: Three guys are walking with blasts happening behind, nobody will notice you. And I kept that shot. In the promo, she blinks while walking. But kaun dekhega? said Rohit Shetty.

Starring Akshay Kumar and Katrina Kaif in the lead roles, Sooryavanshi is an action drama and is the fourth installment of Rohit Shetty’s cop universe. The film has been backed by Karan Johar under the banner of Dharma Productions and is slated to hit the big screens on March 24 this year.