The year 2020 has been a rough year with coronavirus pandemic and many Bollywood celebrities left us. The most talented stars left for their heavenly abode including Irrfan Khan, Rishi Kapoor, Wajid Khan, and now Sushant Singh Rajput. Giving tribute to all, Ranbir Kapoor’s sister Riddhima Kapoor took to Instagram stories to share a collage of the four legendary stars who left us.  Along with the picture, she has put up a caption that reads, ‘Legends Live on Forever’. Also Read - Sushant Singh Rajput Death: Ankita Lokhande to Host Prayer Meet For The Actor 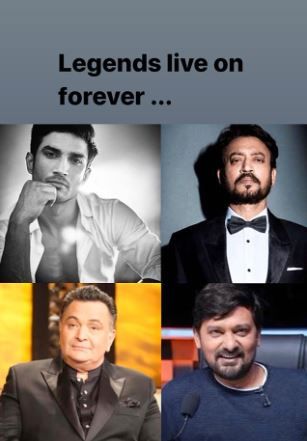 Sushant Singh Rajput committed suicide by hanging himself at his Bandra residence. Police reports stated that he was suffering from clinical depression and has been receiving treatment for the last six months. They even revealed that he stopped taking his anti-depressant pills. It has also been said that he lost seven films in last six months.

Riddhima and Ranbir lost their father Rishi Kapoor on April 30, 2020 after he succumbed to cancer. The Bobby actor has battled with cancer for two years and even went to New York for its treatment.

Irrfan Khan passed away On April 29 and he was also suffering from cancer. His demise also shocked everyone and the nation was in a state of grief. Composer Wajid Khan suffered a heart attack and was also tested positive for COVID-19.

Sushant’s demise sparked a debate on mental health awareness and the prevailing nepotism in the industry. Bollywood biggies such as Sonam Kapoor, Karan Johar, Alia Bhatt, Salman Khan are being targeted for treating Sushant as an outsider and not welcoming him in the industry. It is also been said that some producers even banned Sushant leading him with no work.

The 34-year-old actor is known for his films such as Kai Po Che, Chhichhore, Shudh Desi Romance, MS Dhoni among others.