Varun Dhawan's Aunt Passes Away, Bollywood celebs Pay Their Condolence to The Family.

Actor Varun Dhawan’s aunt (maasi) has passed away. The actor shared the sad news on social media with a picture with his aunt. Sharing the photo, he wrote, “Love you masi rip” followed by Gayatri Mantra. A few days back, the Coolie No 1 actor revealed that his one of the relative has been tested positive for COVID-19. He said, “It’s very close to home right now. Until it happens to someone you know, you don’t take it seriously and understand the gravity of it.”Also Read - Varun Dhawan to Play Undercover Cop in Hindi Remake of Thalapathy Vijay's Theri? Read on

Many Bollywood celebrities paid their condolences for the family’s loss. Sonam Kapoor wrote, “Omg I’m so so sorry vd” while Nushrat Bharucha commented, “My god! So sorryyy varun!! Deepest condolences”. Also Read - Varun Dhawan is All Praises For Anushka Sharma, Says 'Proud of You Producer Saab'

Sophie Choudry also paid her condolence and wrote, “So sorry for your loss VD. Love and prayers to the family. May her soul RIP.” Also Read - Karan Johar Debuts His Grey Hair Look on Social Media, Varun Dhawan Calls Him 'Bond Villian' 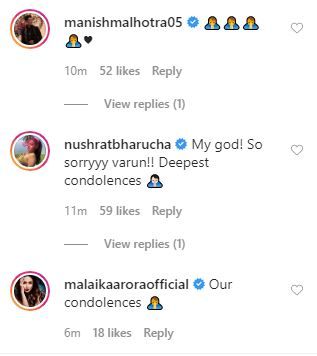 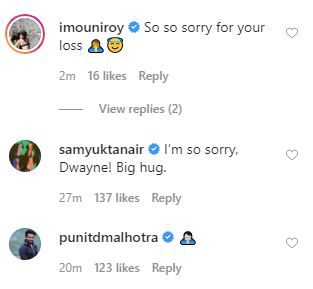 Varun’s childhood friend Zoe Morani, who also tested positive for coronavirus and has now recovered, told the actor about the complications about the disease and that she is taking one day at a time. She revealed that around March 20, she developed fever and weakness after which she started experiencing cough and breathlessness.

The 32-year-old actor also provided meals for the poor who are jobless and without a home. He also provided meals to medical staff at the hospital. Announcing on social media, he wrote, “With each passing day of being locked down at home, my heart goes out to all those who have no home at this time of crises. And so, this week I’ve committed to provide meals for the poor who are without homes or jobs.”

On the work front, he will be next seen in Coolie No 1 opposite Sara Ali Khan.