Malaika Arora gets trolled for her 'weird' walking style. A video was shared by one of the paparazzi where Malaika is seen coming out of her car and walking towards a building. Watch Here.

Mumbai: Fitness enthusiast Malaika Arora often becomes a target to trolls and criticism. Recently, she was trolled for her walking style. A video was shared by one of the paparazzi on Sunday where Malaika is seen coming out of her car and walking towards a building. She was seen clad in black bicycle shorts and a sleeveless gym top with her hair tied into a high bun.Also Read - 'All I Want Is Make You Smile'! Arjun Kapoor Drops Mushy Photo For Ladylove Malaika Arora

What grabbed the attention of netizens was her walking style and many mocked her for the same. While one user wrote, “Idk why but her walking?”, the other simply called it a ‘weird walk’. Another user quipped, “Why is she walking like that.” Also Read - Arjun Kapoor Becomes 'The Lady Killer', Joins Hands With Bhushan Kumar For His 'Most Ambitious Film' | See Poster

One more user asked, “Why is she walking in such a weird manner?” Also Read - 'It's Time For Married Women to Rule The World,' Says Malaika Arora At Mrs India Queen 2021 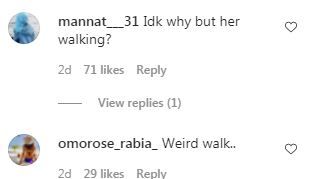 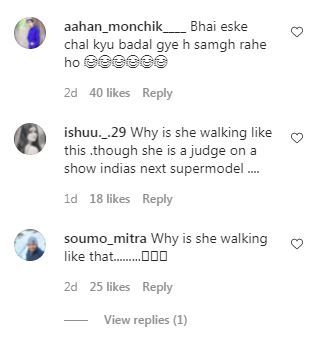 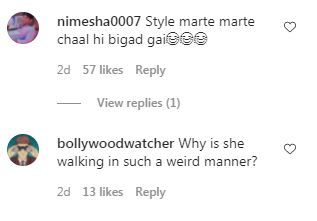 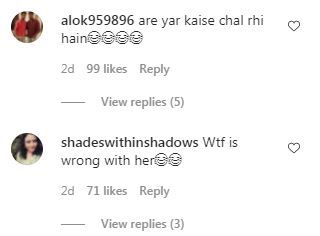 On the personal front, Malaika Arora is dating Arjun Kapoor. The couple made their relationship official with an Instagram post on Arjun’s birthday in 2019. They often holiday with each other’s family members during festivals and special occasions.

Earlier, in an interview, Arjun opened about dating someone older, who also has a son from a previous marriage. He told Film Companion, “I don’t try and be overtly talkative about my personal life, because I feel you should respect your partner, and there is a past there… And I’ve been in that situation where I’ve seen things pan out publicly and it’s not always very nice, because there are kids affected. I try and keep a respectful boundary. I do what she’s comfortable with. And my career should not hinge on my relationship. So you have to create boundaries. I talk about it today because there is a certain respect and regard given to the relationship. We have given it time. I have tried to give it a certain amount of dignity by giving it space, and not having it be in your face.”