Here are the latest pictures of Malaika Arora and Arjun Kapoor clicked outside the former's parents' house in Mumbai. Also seen in the pictures are Malaika's sister and her father.

Actors Arjun Kapoor and Malaika Arora were clicked by the paparazzi making a visit to the latter’s parents’ house in Mumbai. The photographers caught Arjun and Malaika coming out of her parent’s house on Saturday night. Even Malaika’s sister Amrita Arora Ladak joined the couple. Also clicked outside the building was Malaika’s father, Anil Arora, who seemed to come out to escort the couple.Also Read - Malaika Arora, Kriti Sanon, Neha Dhupia Turn Heads With Their Glam Look At Miss India 2022 Event- See Red Carpet Pics

Both Malaika and Arjun looked extremely comfortable in each other’s presence. However, Arjun was seen asking the paparazzi to not go over-the-board while clicking their pictures. For her off-duty look this time, Malaika chose to wear an easy-breezy red coloured skirt with a striped shirt. Her tiny Chanel bag and those white heels further accentuated her look. Malaika looked as stylish as ever. Check out the latest pictures of Arjun Kapoor and Malaika Arora here: Also Read - Malaika Arora Glitters In Gold On Red Carpet Of Miss India 2022, Flaunts Her Curves In Sheer Gown With A Plunging Neckline- See Pics & Videos 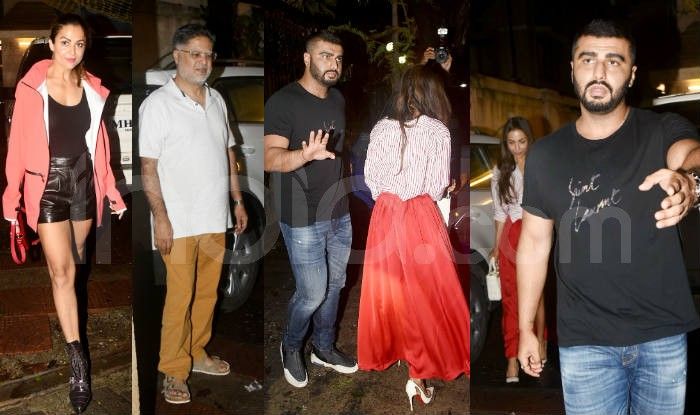 Malaika returned to Mumbai in the morning on Saturday. She was in Delhi for the launch of a brand that she endorses and also to attend an ongoing fashion event in the capital. While interacting with news agency IANS in Delhi, she talked about having second chances in life. Also Read - Arjun Kapoor Credits Trolls on His Body Transformation Journey: 'To Everyone Who Trolled, Criticised, Hated me...'

Malaika said that everyone should be allowed to have second chances in life when it comes to welcoming new relationships again. She was quoted saying, “A little more sensitivity (is needed), as opposed to being harsh and callous and negative towards things. I think it is important to be inclusive. When I talk of second chances, I’m thinking of making the most of second chances. I think everybody should be given a second chance.”

The actor, who is often trolled for dating a man much younger to her, revealed that she doesn’t give any importance to the trolls and negativity on social media. Malaika said that she’s happy and at peace in her life today and that’s what matters to her the most.