Malaika Arora shares a childhood picture of ex-husband Arbaaz Khan to prove that their son Arhaan Khan looks like his dad. Check the viral post.

Actor Malaika Arora recently shared a picture of her ex-husband Arbaaz Khan on Instagram. The actor took to her Instagram stories and posted a childhood picture of Arbaaz, highlighting the stark facial similarities between Arbaaz and their son Arhaan Khan. Malaika put a collage of Arhaan’s childhood picture and Arbaaz’ photo to mention how their son looks exactly like his father. Also Read - Mouni Roy Looks Casual and Chic in a Little Black Dress 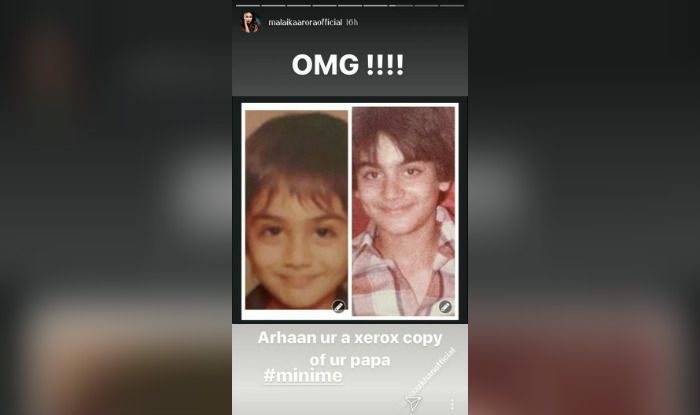 Malaika is not seen talking about her family or sharing pictures of her family members on social media that often. Therefore, this post comes like a rare surprise to her fans. Recently, the actor even opened up on Arhaan’s plan of venturing into Bollywood like most men from the Khan family. Malaika said that an inclination towards films comes quite naturally to Arhaan because he has been brought up in a filmy family. However, he isn’t yet sure about what he wants to do with his future. The actor told Zoom in an interview: “He loves films because that is the environment he grew up in, He loves watching and following films. But what is he going to do about it, I think no one is sure. Because he is not sure yet.” Also Read - Amrita Arora Lashes Internet For Leaking Sister Malaika Arora's COVID-19 Report

Meanwhile, the rumours are rife regarding Malaika’s wedding with Arjun Kapoor. The two have been dating for a while and now speculations suggest that the wedding bells are soon going to be ringing for them. However, neither Malaika nor Arjun has confirmed the news. They are still maintaining that there’s no ‘marriage on the cards.’

“In the business, everybody is at the receiving end of all of this (speculations about marriage). No one is spared of these kinds of conjectures so to speak. Like we have said, there’s no marriage on the cards right now,” Malaika was quoted saying. She got divorced with Arbaaz in the year 2017.