Soha Ali Khan recently shared a picture of the entire family when her mother Sharmila Tagore came to visit. And now, a throwback picture of the family from Saifeena's wedding is going viral.

A new photo of Saif Ali Khan and Kareena Kapoor Khan is going viral on social media. It’s a throwback picture from their wedding in which the entire Pataudi family can be seen posing with the couple. The picture surfaced on the internet after Soha Ali Khan shared a photo taken recently. It showed the entire family in the frame with Taimur Ali Khan as the new addition. Now, fans are sharing the old photo to show how beautifully Saif’s family has evolved over the years. Also Read - Akshay Kumar-Sara Ali Khan Are a Desi Couple in New Still From Aanand L Rai's Atrangi Re

Both the photos have Soha, Ibrahim Ali Khan, Sara Ali Khan and Sharmila Tagore along with then newlyweds Saif and Kareena. While Saba is present in the old frame, her absence is felt in the new picture. Check out these: Also Read - Sara Ali Khan Does Naagin Dance, Sizzles in Yellow Lehenga in 'Teri Bhabhi' Song From Coolie No. 1 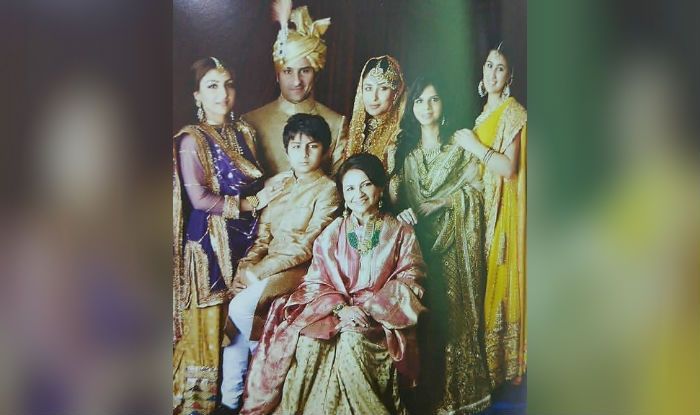 Like the branches of a tree ❤️ #family #familygoals #missingafew @saraalikhan95

After the latest photo shared by Soha went viral, Sharmila Tagore talked to a daily and revealed what happened that evening. The veteran actor said that since she was in the town, her kids decided to have a small get together. The mother of three also said that  Saba and Soha’s husband Kunal Kemmu were missing from the picture because they couldn’t make it to the do. On the other hand, his cousin Inaaya Naumi Kemmu had already dozed off before her mother Soha came to attend the party at Saif-Kareena’s Bandra residence. Saba had been fasting and as revealed by her mother, she doesn’t like to be a part of gatherings once she has observed the fast.

Sharmila also said that Saif himself cooked the dinner that included both vegetarian and non-vegetarian food items. The do, as she went on to say, was wrapped up early because Taimur was preparing to sleep around 9: 30-10 pm.

The picture was also shared by Kareena’s sister Karisma Kapoor. Currently, both Saif and Kareena have gone to London with Taimur. The actor had to shoot his next film Jawaani Jaaneman in the UK and his wife and son accompanied him. The family was clicked at the airport by the paparazzi the other day.