Almost everyone in Tinseltown and outside is seen fantasizing about having a perfect waistline and sexy curves like that of Sooryavanshi star Katrina Kaif and while fans cannot stop swooning over their favourite’s hot bod, actor Parineeti Chopra was seen accusing her. Flaunting her sultry frame, Katrina shared a picture recently which instantly set the Internet on fire. Also Read - Sooryavanshi Box Office: Why January Release Like Master Was Better, And How OTT is Not an Option Anymore

Taking to her Instagram handle, Katrina shared the picture featuring her in a full-sleeves black crop top and black tights. Sporting a wet hair look, Katrina struck a sensuous expression as she flaunted those oh-so-perfect curves. Winning over Parineeti, the picture was enough to make her go weak instantly. Katrina captioned the picture, “Reebok by Pyer Moss . A secret pop up in Delhi is your only chance To get your hands on this limited edition collection ….launching exclusively at Olive Bar and Kitchen on the 11th and 12th of January, 2020. @reebokclassicindia& @pyermoss #ReebokByPyerMoss#Reebok #PyerMoss (sic).” Quick to comment, Parineeti wrote, “My weak heart @katrinakaif (sic).” Also Read - Katrina Kaif Tests Positive For COVID-19, Urges Others to Get Tested

🌟Reebok by Pyer Moss . A secret pop up in Delhi is your only chance To get your hands on this limited edition collection ….launching exclusively at Olive Bar and Kitchen on the 11th and 12th of January, 2020. @reebokclassicindia& @pyermoss #ReebokByPyerMoss#Reebok #PyerMoss 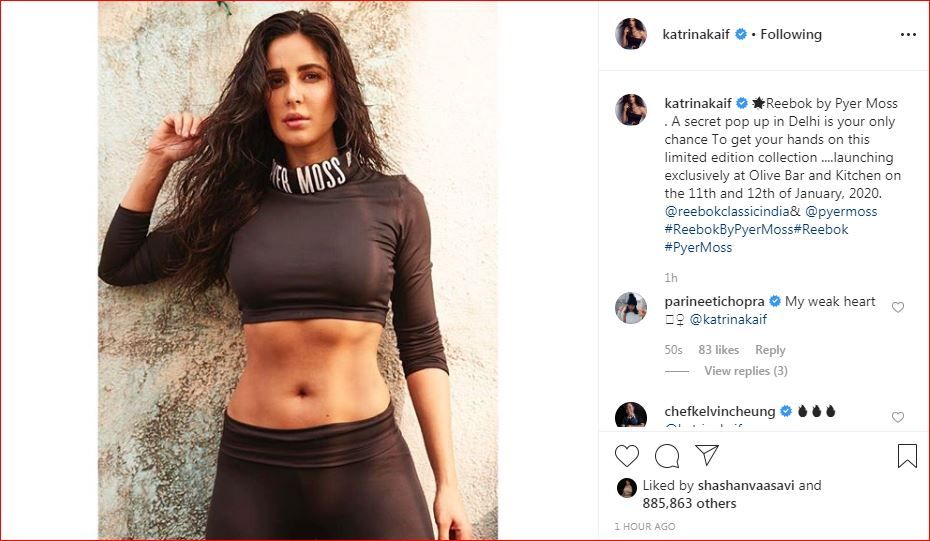 On the professional front, actor Parineeti Chopra is all set for her upcoming thriller, The Girl on The Train. She was earlier seen sharing pictures from the sets which left fans excited like never before. Based on the 2015 bestseller by Paula Hawkins, The Girl on the Train is the story of an alcoholic divorcee woman who gets entangled in a missing person investigation that throws her life to the brink. The psychological thriller is backed by Reliance Entertainment. Parineeti plays the alcoholic woman while Aditi Rao Hydari plays the other woman in her life and Kirti Kulhari essays the role of a tough cop.

As for Katrina, the diva is gearing up for Rohit Shetty-directorial, Sooryavanshi opposite Bollywood’s Khiladi, Akshay Kumar. Sooryavanshi brings back Katrina and Akshay together after nine years. In the film, Akshay essays the role of Veer Suryavanshi, a character introduced as an anti-terrorist squad officer in the 2018 Simmba, starring Ranveer Singh. The movie, which is scheduled to hit the screens on March 27, 2020, also stars Gulshan Grover.