Arjun Kapoor's leg-pulling session by Parineeti Chopra in public glare is all best friends ever!

A good friend will tell you that you look good while your best friend will roast you in public light until you turn immune to their compliments Parineeti Chopra is no different since her trolling comment on Namaste England co-star, Arjun Kapoor, left fans in splits. Painting up his face like a clown, Arjun had left fans speculating. Also Read - Anurag Kashyap Claims Parineeti Chopra Did Not Want To Do Hasee Toh Phasee With ‘TV Actor’ Sushant Singh Rajput

Taking to his Instagram handle, Arjun shared a picture of himself with his face painted and captioned it, “Mera naam JOKER (sic).” Quick to troll, Parineeti commented, “Harkatein bhi .. (Even actions)” (sic) and fans doubled down with laughter. Also Read - Muslim Man’s Hand Allegedly Chopped Off With Chainsaw After Attackers Spot '786' Tattooed on His Arm 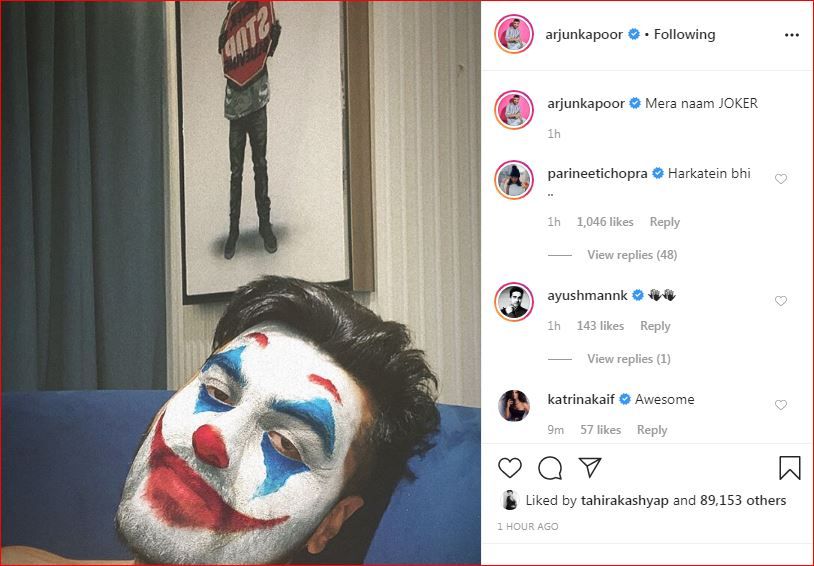 Parineeti Chopra’s comment on Arjun Kapoor’s pictureOn the professional front, Arjun Kapoor, who was last seen in biographical drama ‘Panipat’ alongside an ensemble star cast including Kriti Sanon and Sanjay Dutt, will next be seen in ‘Sandeep Aur Pinky Faraar’ romancing Parineeti Chopra. The two have earlier shared the screen space in blockbuster hit ‘Ishaqzaade’. The movie ‘Sandeep Aur Pinky Faraar’ is a romantic comedy written and directed by Dibakar Banerjee.

As for actor Parineeti Chopra, the diva is all set for her upcoming thriller, The Girl on The Train. She was earlier seen sharing pictures from the sets which left fans excited like never before. Based on the 2015 bestseller by Paula Hawkins, The Girl on the Train is the story of an alcoholic divorcee woman who gets entangled in a missing person investigation that throws her life to the brink. The psychological thriller is backed by Reliance Entertainment. Parineeti plays the alcoholic woman while Aditi Rao Hydari plays the other woman in her life and Kirti Kulhari essays the role of a tough cop.