Priyanka Chopra’s brother’s wedding was mutually called off with Ishita Kumar. The pictures of their roka ceremony were shared by PeeCee which had made a lot of buzz. Following this, Ishita unfollowed her ex-fiance from social media and removed all pictures of their roka ceremony.  Recently, Ishita took to Instagram to share a cryptic message and few of her followers asked if she was hinting at Siddharth Chopra. The message reads, “Men no longer give us butterflies..Straight high blood pressure now.”Also Read - Priyanka Chopra Jonas Turned NYC Airport into Her Runway in Rs 3 Lakh Dior Leopard Print Hoodie

One user commented, “U mean siddharth chopra” while the other asked, “Y broke up with PC’s bro.” Also Read - Priyanka Chopra Breaks Silence On 'The Activist' Controversy, Apologises For 'Disappointing' Fans

Check out the comments below: 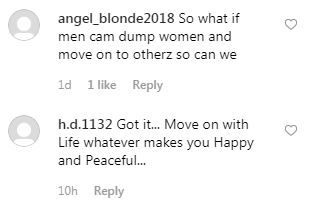 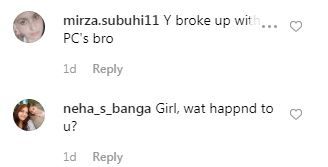 Recently, Priyanka’s mother Dr Madhu Chopra revealed to an entertainment portal that Siddharth was not ready for the marriage yet and therefore he and Ishita Kumar decided to not go ahead with the wedding. She simply revealed to Spotboye that the wedding cancellation happened from the groom’s side and Siddharth needs some more time to take the plunge. She said in a statement, “My son Siddharth said he was not ready for marriage yet. He explained he needed more time.” She earlier confirmed that the wedding of his son with Ishita had been called off after the Roka ceremony. She told Pinkvilla, “They (Siddharth and Ishita) have mutually called it off.”

Earlier this year, Priyanka posted a picture of Sisharth and Ishita welcoming her to the family. She captioned it, ““So proud of my baby brother. Ishita welcome to the family…you are so beautiful together…I wish you both the best for the future! Happy Roka!! @ishittaakumar @siddharthchopra89.”

So proud of my baby brother. Ishita welcome to the family…you are so beautiful together…I wish you both the best for the future! Happy Roka!! @ishittaakumar @siddharthchopra89 ❤️🎉

Ishita also made a post posing at a restaurant with a cryptic caption that read she was making new beginnings by saying goodbye to old memories. This lead to the speculations of cancellation of her wedding with Siddharth. What added fuel to the fire were the comments on her post. She was asked to ‘stay strong’ and ‘move on’ by his well-wishers in the comments.

Siddharth was expected to get married in the year 2014 as well with another girl. However, after making the official announcement of the Roka ceremony, he didn’t get married. The wedding was called off and the reason remains unknown.