Priyanka Chopra took to Instagram to share a video which is a compilation of her and Nick's beautiful moments together. The actor wrote a lovely birthday wish for her darling husband.

Actor Priyanka Chopra Jonas finally took to social media to wish a very happy birthday to her darling husband Nick Jonas. The former Miss World posted a beautiful clip on Instagram with a lovely note in the caption. The clip is basically a compilation of Nick and Priyanka’s adorable moments – from red carpets, family outings, their weddings, instant display of public affection and just togetherness in its pure form. Apart from wishing birthday to her ‘jaan’, Priyanka also thanked him for coming to her life and blessing her with love. Also Read - Priyanka Chopra Couldn't Stop Crying on The Sky is Pink-Sets: Shonali Bose Reveals Emotional Incident

The caption on the post reads, “The light of my life. Everyday with you is better than the last. You deserve all the happiness in the world. Thank you for being the most generous loving man I have ever met. Thank you for being mine. Happy birthday Jaan. I love you @nickjonas” (sic) Also Read - Priyanka Chopra Jonas Writes an Emotional Note For Team of The Sky is Pink After it Gets Standing Ovation at TIFF 2019

Nick commented and posted many hearts. 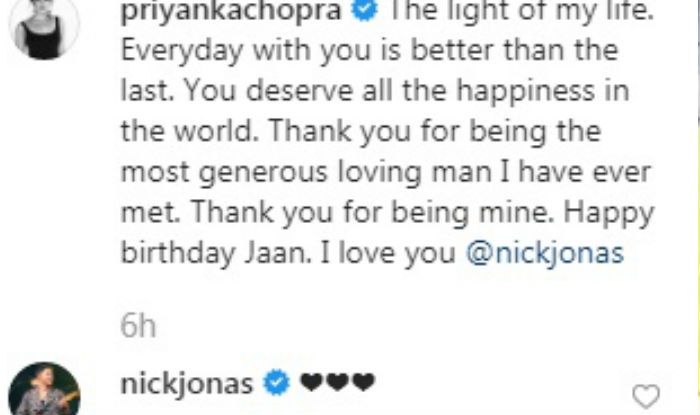 Imbed turned 27-year-old on September 16. American singer, songwriter and music composer is currently touring the world as part of his world tour concert titled Happiness Begins. Nick is joined by his brothers and band members Joe Jonas and Kevin Jonas and together, the three have rocked various cities of the US.

Meanwhile, more pictures from Nick’s 27th birthday bash are expected to appear on social media today. Earlier, in July this year, when Priyanka celebrated her 37th birthday, the family hosted an intimate party for her in which she was seen dressed in a striking red dress. Even her sister Parineeti Chopra also joined the celebrations for the day. Following the party, the Jonas family and Priyanka’s friends went on a yacht-day.