It has been a long yet special month for Priyanka Chopra and Nick Jonas who tied the knot in two ceremonies on December 1 and 2. Post their marriage, they hosted two grand receptions. One on December 19 for PeeCee’s extended family and the media and the other on December 20 for her industry friends. In between all the wedding functions, the couple kept sharing adorable pictures of the two together. Recently, Priyanka shared a candid picture with her Husband Nick which shows their fondness for each other. Also Read - Priyanka Chopra Jonas’s Yellow Leather Bag is Worth Whopping 3 Lakhs, Check it Out

Both Priyanka and Nick’s Instagram are flooded with pictures of the two. Now that all the functions are done, Priyanka took a moment to share a candid picture from one of her wedding ceremony where the couple can be seen holding each other while looking away from the camera and giving a million dollar smile. It is a treat to the eyes to see the newlyweds so happy. Also Read - Can You Guess The Cost of Priyanka Chopra's Stunning Off-Shoulder Black Dress?

Also Read - Priyanka Chopra Jonas' Unfinished is Already a Best Seller in The US, Actor Makes a Happy Post 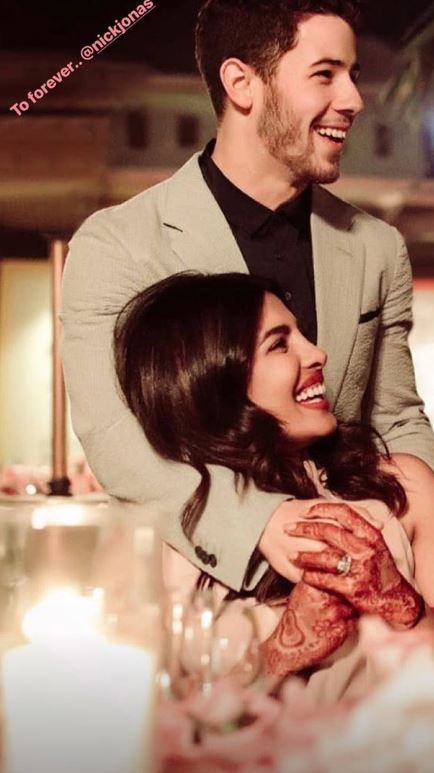 Latest reports suggest that PC and Nick will be hosting another reception in Los Angeles. A report in a leading Indian daily suggests that the newlyweds are going to throw a ‘black-tie’ event inviting some big names from Hollywood, and PC’s good friend, Duchess of Sussex Meghan Markle with Prince Harry.

Priyanka just hosted a wedding reception for her industry friends in Mumbai. It was attended by celebrities like Ranveer Singh–Deepika Padukone, Karan Johar, Rekha, Katrina Kaif, Anushka Sharma, Janhvi Kapoor, Sara Ali Khan, Shahid Kapoor-Mira Rajput and Kangana Ranaut among others. Before that, the couple hosted another wedding reception in Mumbai’s JW Marriott for the media and PC’s extended family.