Bollywood unites to raise awareness about flood in Assam, Priyanka Chopra, Shraddha Kapoor, Dia Mirza and others reach out to victims through various helplines and donation campaigns

The eastern part of India has been hit by massive flood and as rescue and relief operations continue in the 33 affected districts, 17 people are already reported to have lost their lives apart from the 45 lakh people displaced in Assam. While this is the human count, one cannot even sum up the tragedy that befell the animals, especially those in the Kaziranga National Park as in an attempt for survival, the wild animals were seen running into human habitations and suffering injuries thereoff. Raising awareness about the distressed situations of the flora, fauna and people alike, Bollywood celebrities including Priyanka Chopra, Shraddha Kapoor and Dia Mirza urged fans for donations.Also Read - Massive Bonus For Babar Azam-Led Pakistan Team if They Beat India, Win T20 World Cup

Priyanka, who is UNICEF’s Goodwill Ambassador, took to her Twitter handle and shared, “Extremely devasted by all the news coming in from #Assam and other parts of India. It’s heartbreaking to read about the displacement and loss of life. My prayers with those affected (sic)” along with mentioning the websites that were collecting funds and mentioned, “Please donate at https://cm.assam.gov.in/relieffund.php and https://donate.oxfamindia.org/assam-floods-2018 … (sic)” Also Read - T20 World Cup: India vs Pakistan Head to Head Record in Biggest Stage of the Shortest Format of the Game

Shraddha took to her Instagram’s story feature to reshare her rumoured boyfriend Rohan Shrestha’s post, citing the current situation in Kaziranga National Park. She captioned it “Heartbreaking” while the next story showed a picture of rhinoceros fighting hard to star affloat and was captioned, “90 percent of Kaziranga National Park submerged; anti-poaching camps affected.” Urging fans to do their bit, Shraddha too shared links to help the Wildlife Trust of India “through this environmental crisis.” Also Read - T20 World Cup, INDvPAK: Pakistan Chairman Ramiz Raja Gets On A Call With Babar Azam, Suggests How To Approach Marquee Clash

Talking on the same lines, Dia, UN Environment Goodwill Ambassador for India, too drew attention towards the “extraordinary rescue and rehabilitation work being done by” the Wild Life Trust of India and asked for donations to aid the forest rangers, officers and vets who “are hard at work to rescue and rehabilitate wildlife in Kaziranga.” 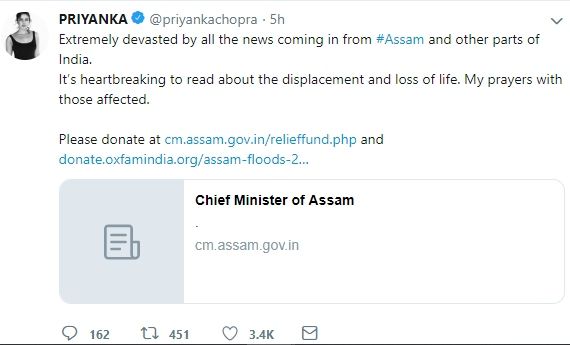 Teams of the National Disaster Response Force (NDRF) and the SDRF are on the job of rescue and relief work in the flood-affected areas.

The situation in Kaziranga and Manas National Parks and Pobitora Wildlife Sanctuary has also been critical and forest and police personnel are maintaining a vigil to ensure the safety of animals. An official report said that the traffic has been restricted along the nearby national highways for a safe movement of animals.

Meanwhile, the death toll has risen to 17 with two people dying in landslides because of heavy rains. While the Army is helping in rescue operations, the Border Security Force has been roped in for border districts.

The Brahmaputra and its tributaries are flowing above the danger level in most districts, said the Assam State Disaster Management Authority (ASDMA).