Priyanka and Nick took wedding vows in December. Speculations are doing the rounds that the actress is expecting her first baby.

It’s been two months since Priyanka Chopra and Nick Jonas took wedding vows, speculations about the actress’ pregnancy have already started doing the rounds. A couple of days back, some of her pictures from a fashion show surfaced on the internet in which she was spotted with a prominent stomach bulge. This raised eyebrows. It is being said that Priyanka is trying hard to keep her pregnancy under wraps. However, the actress has not said anything on the same.Also Read - BTS Boys Coming To India Soon? ARMY Speculates After Priyanka Chopra Introduces Them At Global Citizen Stage

Pinkvilla quoted Priyanka’s friend as saying, “If she had a dream wedding in 2018, motherhood is what she is most excited about in 2019.” In a recent interview, when the actress was asked about starting a family, she said, “We both know that that’s something that needs to happen, but it’s not something I think about very much. We’re both very driven, we love our work, we’re married to our work, and we’re both very supportive of each other’s work. So I’m sure it will happen in an organic way.” Also Read - Priyanka Chopra Looks Dreamy in Earth Themed Prabal Gurung Ensemble at Global Citizen Live in Paris

Check out Priyanka’s pictures that added fuel to the fire: 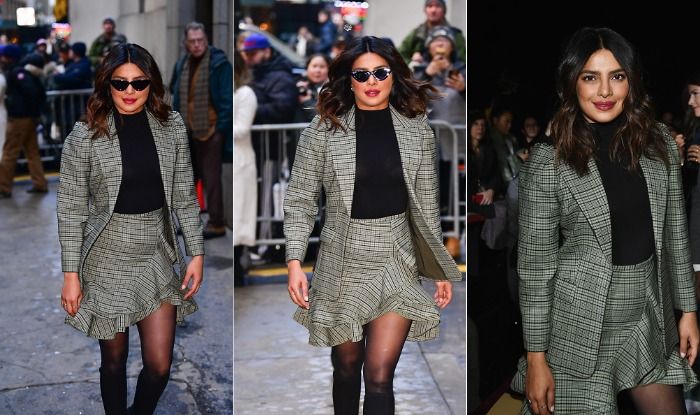 Priyanka and Nick took wedding vows as per Christian and Hindu rituals in Jodhpur. Though they have work commitments, the couple always manages to take out time for each other. Also Read - Priyanka Chopra Jonas Turned NYC Airport into Her Runway in Rs 3 Lakh Dior Leopard Print Hoodie

Recently, they were spotted at the world premiere of Isn’t It Romantic that also featured PeeCee. Both the stars stole the show with their PDA.

Isn’t It Romantic released on February 13 and will stream exclusively on Netflix India on February 28. The project is helmed by Todd Strauss-Schulson. It also featured Rebel Wilson and Liam Hemsworth in crucial roles.

On a related note, Priyanka will also be seen in The Sky is Pink With Farhan Akhtar and Zaira Wasim. She will start shooting for the next schedule in March.