Priyanka will begin work on her second film in August.

Priyanka Chopra is back in the city. The actress will soon begin work on her much awaited Bollywood film after a two-year-long gap. PC is all set to start work on Salman Khan’s Bharat which is being directed by Ali Abbas Zafar. A few hours ago, the actress teased us with the title of her next film directed by Shonali Bose. Yes, the actress is indeed doing Shonali’s film and it is titled The Sky Is Pink. The Quantico babe is currently prepping for that film as well and she revealed it on social media. Also Read - Sushnat Singh Rajput, One Last Time! Priyanka Chopra Shares Dil Bechara Trailer, Says 'Celebration of Love, Friendship, Life'

Earlier the film was to star PC, Abhishek Bachchan and Zaira Wasim but the film will now star Farhan Akhtar after Jr Bachchan decided to opt out of the project. The film is all set to go on floors in August and the actress has already begun work on it. Priyanka shared a draft of the film script and wrote, “And it begins #prep #hindimovie”. The film is based on the life of Aisha Chaudhary, who became a motivational speaker after being diagnosed with pulmonary fibrosis at the age of 13. While Zaira will essay the role of Aisha, Farhan and Ms Chopra will play her parents. Also Read - Bigg Boss 14: Salman Khan to Charge Whopping Rs 16 Crore For The Show? 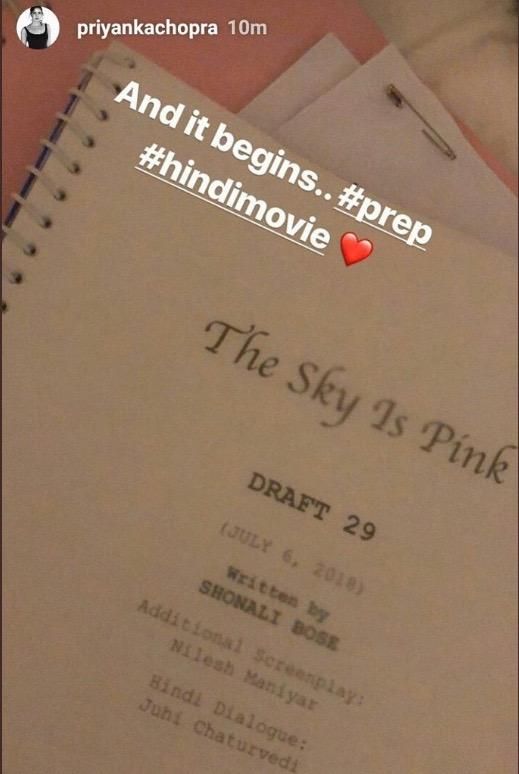 So with this, Priyanka is all set to work on two films at a time – Bharat with Salman which also stars Disha Patani, Tabu and Sunil Grover and the Sky is Pink. We love how the actress is picking diverse and interesting films as she is returning to the big screen after more than two years. We totally cannot wait to see PC on the big screen. What about you? Do let us know your thoughts in the comments section below!