Ranbir Kapoor, Alia Bhatt Trolled by Netizens, Were They Too Quick to Judge Them in These Sensitive Times?

The world mourned the death of Rishi Kapoor and when the pictures of his funeral surfaced on the internet where Alia Bhatt and Ranbir Kapoor were mercilessly trolled. In the photos, Alia Bhatt can be seen consoling Neetu Kapoor as she also video calls Riddhima Kapoor to see her father one last time as she could not reach Mumbai in time and on the other hand, Ranbir looked devastated with his head down. However, without much knowledge of the affairs during a tough time, netizens started to judge Ranbir Kapoor and Alia Bhatt. Also Read - 'End of Our Story'! Neetu Kapoor's Emotional Goodbye to Rishi Kapoor Will Bring Tears in Your Eyes

They even started trolling them for not being at their best ‘funeral’ wear and behaviour. The social media users were quick to troll Ranbir Kapoor as he was ‘dressed too informally’ for the funeral in blue shirt and ripped denim while Alia was on the phone and many thought that she is ‘recording the funeral’ or ‘taking selfie’. Also Read - Rishi Kapoor's Last Rites Will be Performed Today at Chandanwadi Crematorium by Son Ranbir Kapoor

Rishi’s daughter Riddhima, who stays in Delhi, had reportedly asked the Union Home Ministry last night for permission to fly to Mumbai by a chartered flight. As per the sources, she was told permission to fly could only be given by Home Minister Amit Shah. As an option, she asked to be allowed to drive to Mumbai in a group of five. 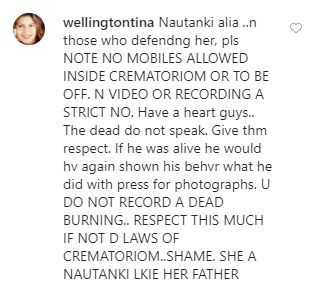 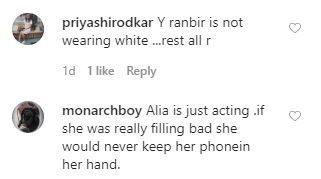 The Mulk actor died at the age of 67 on April 30 after a long battle with bone marrow cancer. He was cremated in Chandanwadi crematorium with family members and few industry celebrities in attendance. The funeral was attended by Ranbir Kapoor, wife Neetu Kapoor, Alia Bhatt, Randhir Kapoor, Babita Kapoor, Kareena Kapoor Khan, Saif Ali Khan, Ayan Mukerji, Anil Ambani among others.

The actor is survived by his wife Neetu Kapoor and children Ranbir and Riddhima Kapoor.