Rani Mukerji says women need to change and learn to protect themselves. Twitterati are like, 'please do your homework first'

Feminism, women empowerment and gender equality mean different to all because everyone has their own life experiences. Likewise, the understanding of #MeToo movement was different for different people, when it hit the nation. For actress Rani Mukerji though, the idea of this term is strikingly distinct from what majority of women think all over the world. Rani spoke her mind on our country embracing the movement at a recently held interview. However, what she said received instant criticism on social media. Joining her there were Deepika Padukone, Anushka Sharma, Tabu, Alia Bhatt, and Taapsee Pannu, who were also left with their jaw dropped listening to Rani. Also Read - Anushka Sharma-Virat Kohli Send Special Gifts to Paparazzi Requesting Them to Not Click Their Daughter

Rani said that women need to change and they should become more powerful. She said women should learn to raise “their sons right” and “if they don’t want it to happen, it won’t happen”. Rani said, “I think as a woman, you have to be that powerful within yourself, you have to believe that you’re so powerful that if you ever come into a situation like that, you have the courage to say ‘back off’. Everything relates to what you want out of your life. If ever they (women) find themselves in a situation like that, they should make sure that the man suffers right there and then. You have to have the courage to be able to protect yourself”. Also Read - Virat Kohli And Anushka Sharma Request Paparazzi to Not Click Photographs of Their Newborn Daughter 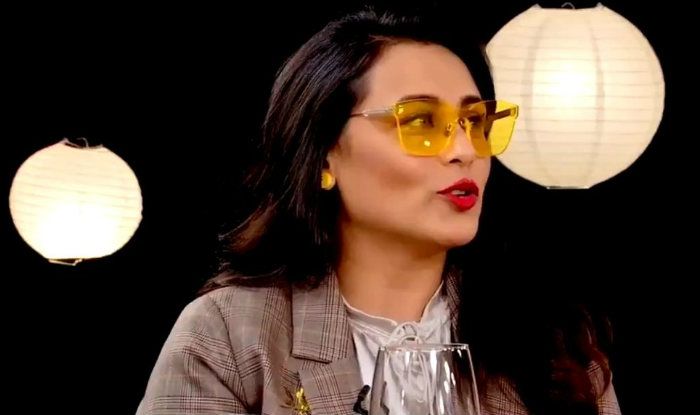 The other actresses who were trying to understand Rani’s point of view started disagreeing with her statement. Deepika said that even though she agrees women should train themselves with martial arts and should work on learning techniques to protect themselves, every woman doesn’t have that luxury. She said, “Everyone is not constructed with that sort of DNA unfortunately. There are women who feel cornered.” Also Read - Virat Kohli-Anushka Sharma's Picture Appears in Newspaper Piece About JeM Terrorists; Alleged Goof-up Goes Viral

Rani interjected by saying “Those are the women we need to talk to and tell them to change”. To which, Anushka replied, “But, then again, it’s like we’re talking about what women need to change rather than the other way round”.

Now, while the dissent was seen in the discussion itself, people on social media are not particularly happy with Rani’s statement. Check out these tweets:

#ActressesRoundtable
Martial arts and women with an attitude of kicking men between their legs should be enough to tackle harassment at workplaces according to #RaniMukerji. WTF!!!
Madam Mukerji, Could you please practice the art of LISTENING everyday for 10 minutes.?

#RaniMukerji your privileged background has made you a total ignorant. This is no trolling but a voice of a disappointed fan.

Exploitation of a woman is not only physical but can be emotional and mental too..
So how will self defense help in it ?
Can a subordinate hit her boss in the groin when she has her career on the line ? #RaniMukerji https://t.co/6iinvCpJZR

A person like #RaniMukerji should speak some sense at least. She's talking about self defense and learning martial arts (chak chak chak? 🤔🤭🤐) but always roam with bouncers to save herself. Such a hypocrite and her latest comment is so appalling.

Jus felt Radhika apte could have been there instead of #RaniMukerji

There are 2 ways to get your statement highlighted
1. Either it's needs to be strong enough to do the job
2. Or ridiculous enough#RaniMukerji proved she's #Rani of the second type #MeToo #RaniMukherjee

Totally agree with women countering #RaniMukerji. No woman would ever WANT sexual abuse or rape or is ‘asking for it’. Self Defence etc is good but when shall we start talking about guys????????? #MeToo #MeTooMovement

“If they don’t want it to happen it will not happen."- Like seriously woman, which planet are u from.??

“Those are the women we need to talk to n say yaar u need to change.” – What abt the men then.??

Soo disappointed. #RaniMukerji take on #Metoo its the stupidest take ever.

What Rani said is not offensive but how she completely ignored the need for men to change, is a problem here. Your thoughts?