Actor Ranveer Singh, who is set to essay the role of World cup-winning skipper Kapil Dev in his upcoming film 83’, has taken to Instagram to wish the cricketer on his birthday with an adorable video montage. He penned an endearing note with the montage video of the making of his film 83’ featuring the cricketer.Also Read - Vicky-Katrina Marriage Latest Updates: Vicky Kaushal And Katrina Kaif To Go For Court Marriage In Mumbai, All You Need To Know | Watch Video

He wrote, “Colossus of a Captain! Gem of a person! Thank you Sir for embracing us and allowing us to tell your extraordinary story! Here’s wishing the OG @therealkapildev good health and joy on his special day! #ThisIs83 #HappyBirthdayKapilDev” (sic). Also Read - EXCLUSIVE: Sahher Bambba On Her Upcoming Web Series Dil Bekaraar And Her Journey | Watch Video

Earlier, Kabir Khan also shared a similar video and called him a ‘legend’. He wrote, “legend for an entire generation. A hero for an entire country. Here’s wishing @therealkapildev sir a very happy birthday. Janamdin Mubarak sir… #ThisIs83 #HappyBirthdayKapilDev. (sic)” Also Read - Kapil Dev Questions Hardik Pandya's All Round Capabilities Since He is Not Bowling

Rakul Preet Singh too wished the former cricketer and wrote, “Have a beautiful, healthy year hope to golf soon with you again Happpy birthdayyyy @therealkapildev” (sic). 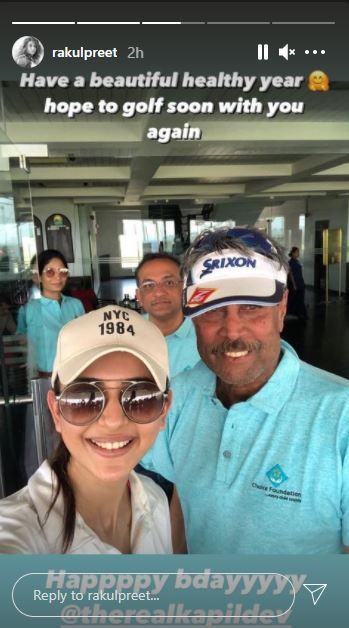 Meanwhile, Ranveer Singh and Deepika Padukone 83’ is the story that revolves around how Team India created history by winning the World Cup for the first time in 1983 under the captainship of Kapil Dev. The film also features Pankaj Tripathi, Boman Irani, Tahir Raj Bhasin, Saqib Saleem, Harrdy Sandhu, and Ammy Virk.