Rekha's reaction to Amitabh Bachchan's photo at the launch is now viral.

Veteran actor Rekha was present at the recently held big launch event of photographer Dabboo Ratnani‘s annual calendar. Her video from the launch is now going viral on the internet. The reason: she is seen giving a hilarious reaction to the portrait of actor Amitabh Bachchan. In a short clip shared by a photographer on Instagram, Rekha can be seen posing for the shutterbugs, only to move out of the frame the moment she realises she’s posing in front of Bachchan’s picture hanging on the wall behind. Check out this video:Also Read - Breaking: Kusal Mendis Taken Of The Field Due To Massive Chest Pain; Hospitalised

Rekha wore a black dress for the launch and styled it with her signature red lips. She was also donning big sunnies. The veteran star was clicked with actor Vidya Balan sharing a candid moment. Check these pictures: Also Read - Vastu Tips For Money: 5 Mistakes To Avoid While Calculating Notes 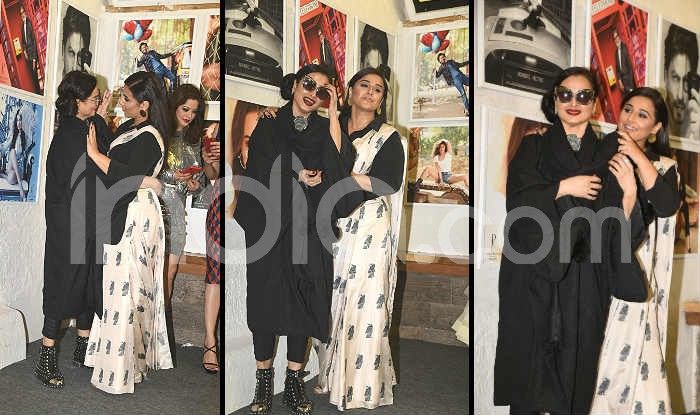 On the work front, Rekha was last seen in a full-fledged role in the year 2014 in Super Nani. The actor played the character of Bharti Bhatia, an old housewife who becomes a successful star making her family realise the value of a woman in the house. She was also seen performing a special dance number with Deols, Salman Khan, Sonakshi Sinha and others in the recently released Yamla Pagla Deewana Phir Se. Rekha will next be seen essaying the role of Sakina Banu Begum in Panipat, directed by Ashutosh Gowarikar. The film features Arjun Kapoor, Kriti Sanon and Sanjay Dutt in the lead and is slated to hit the screens on December 6 this year.