Rhea Chakraborty's co-star Kajol Tyagi Slams Actor For 'Faking Grief', Sushant Singh Rajput's Friend Krissann Barretto Reveals She Did Not Allow The Late Actor to Be in Touch With Any of His Friends.

Actor Rhea Chakraborty’s Jalebi co-star Kajol Tyagi slammed her after her video statement went viral. She revealed how Rhea did not allow Sushant to be in touch with any of his friends. Sushant’s friend Krissann Barretto also took a jibe at Rhea and wrote, “After he started dating this female he was not allowed to be in touch with any of us !! All of his friends !! His numbers were changed and we all know that ! We all tried reaching him but we could not! The statement from his dad says she didn’t even let him talk to his family! @rhea_chakraborty yes the truth will be out we will make sure! Satyamev jayate back at you!” Also Read - Ankita Lokhande Says in Last 1 Year Sushant Was Not Much Visible, Asks ‘Why Was he Changing His Number’ 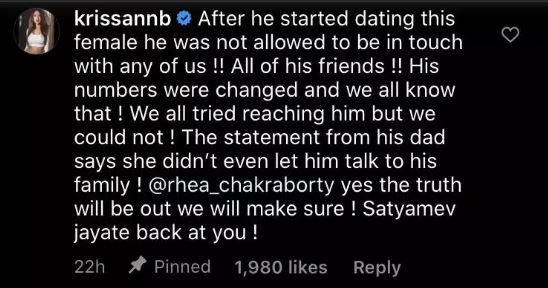 In response to Krissann’s comment, Kajol Tyagi, who has also worked with Rhea in Jalebi, called her grief ‘fake’. She wrote, “I’m insanely proud of you for commenting I was part of jalebi before it went for the reshoot and shot with her for a couple of weeks and I remember Rhea oozing negativity. Literally. I mean in this video also keeping hands folded so that body language experts have a harder time? Well it’s evident she’s faking grief.” Also Read - Gunshots Heard Near Kangana Ranaut's Home in Manali, Actor Says 'This Is How Sushant Must Have Been Frightened'

In the video statement released by Rhea, she said that she has immense faith in God and she will get justice. Her statement came hours after Directorate of Enforcement registered the Prevention of Money Laundering Act case in Sushant Singh Rajput’s death case. In the video, she said, “I have immense faith in god and the judiciary. I believe that I will get justice. Even though a lot of horrible things are being said about me on the electronic media, I refrain from commenting on the advice of my lawyers as the matter is sub-judice. Satyamev Jayate, the truth shall prevail.”