Rimi Sen has no apprehension in going all out and asking for work. She wants to do it the right way and that's the reason she doesn't want to take any help from someone. Here, she talks about her life choices, doing Bigg Boss, Salman Khan, and more - Exclusive.

Rimi Sen Interview-Exclusive: Actor Rimi Sen wants to begin her second innings in the movies. She is keen to take up subjects that can challenge her craft and prove her acting prowess. After performing a supporting character in the National Award-winning film Budhia Singh – Born to Run, Rimi just vanished from the mainstream Bollywood scene. However, the lure of doing better work on OTT platforms has pushed her to come back. What is even more fabulous about the whole idea is that she’s quite vocal in demanding the right kind of work. Rimi’s honesty has always set her apart – be it in Bigg Boss or in her interviews. This time too, she keeps her honesty intact and says she wants to move ahead in the right manner, by doing the right thing and selecting projects that have meaty roles for women.Also Read - When Harbhajan Singh Surprised Geeta Basra on Valentine's Day | Exclusive - Love Story

In an exclusive chat with india.com, Rimi Sen reveals why she quit the industry earlier, why she wants to come back, how she will not ask Salman Khan to give her work, and what makes Bigg Boss a show that doesn’t promise career opportunities. Excerpts: Also Read - Valentine's Day Special: Chunky Panday-Bhavana Panday And Their Quirky Love Story

Where was Rimi Sen all this while and why does she want to come back now?

I want to be back for the work, not for survival. I will not work for the rat race. Initially, I had decided to never come back because honestly, there was nothing exciting happening for female artistes. However, things have changed today. More avenues have opened up for women in the industry and certainly better roles are being written. I want to explore that now. Also Read - Bigg Boss 14: Eijaz Khan on Pavitra Punia, Arrogance, 'Good News', And Love From Fans | Exclusive Interview

So you were all clear about your decision back then and you are sure this time also?

Yes, I knew that I was never fond of glamour or attention. What I wanted was work satisfaction and I never got that. I did films for money. I did many projects for just money but after a point, I just had to quit because it seemed all so mundane to me. 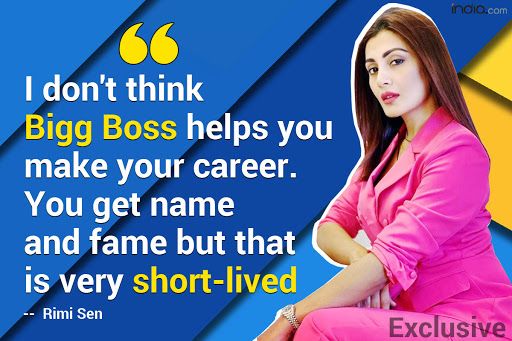 Rimi, do you think that you could have shown more eagerness if Bigg Boss was offered to you today? Could you have utilised the show to get better opportunities?

I don’t think Bigg Boss helps you make your career. You get name and fame but that is very short-lived. You get all the fame, work, events, live sessions, interaction with the audience from Bigg Boss but that just happens for a year. You fade out as soon as the next season begins and new contestants replace you. I just didn’t want to do that ‘hang-in there’ job by doing reality shows, comedy shows, and the like. I want to just give that one memorable performance that can leave my footprints on the audience’s hearts for over 10 years. That is the kind of work I want to do.

So, what exactly are you looking for now?

OTT platforms have opened big doors of opportunities for women. There’s so much that is happening there. And I think that is the space that will be getting even bigger tomorrow. So, I want to work there. There are roles in the lead for women above 40 and that is fantastic. Shefali Shah was amazing in Delhi Crime. Sushmita Sen did a wonderful job with Aarya. If I can though explain it better, I would just say that I am waiting for a role like Vidya Balan’s in Kahaani whether it happens on OTT or on the big screen. 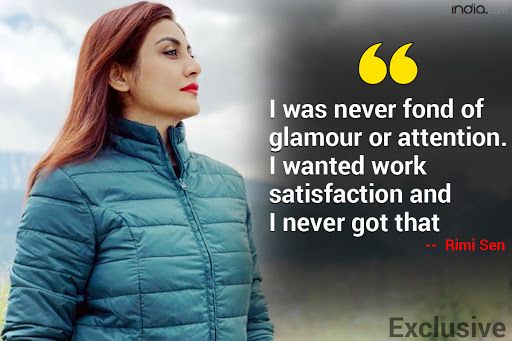 Salman Khan is known to help so many people. He has revived so many careers in Bollywood. You have already worked with him in Bigg Boss and in Kyon Kii, why haven’t you talked to him about your comeback?

Abhi unke paas itna bojh pehle hi hai, aur kitna daalu (He already has a lot on his plate, why would I want to add to his troubles?). Hote hain log aise, but I don’t want to trouble him. He is a very good human being. He helps people out of friendship. However, I want to do it the right way. I don’t want anyone to push for me, to take any extra effort for me. I would never want Salman to take that burden for me.

Why did you lack enough zeal in Bigg Boss? You were seen telling all that you were there to chill and not to play any game. Why such a lack of ambition?

Yeah, because there’s nothing to show your ambition for inside the Bigg Boss house. They only want you to fight, speak loud, scream all the time. I did my kitchen duties properly but I can’t fight to gain attention. They design such tasks that you have to fight among each other and  I just wanted to stay away from that.

What would you want to tell the filmmakers and your audience?

It’s my sincere wish to entertain you all again and hopefully, you’ll see me performing better roles in the future. And my heartfelt request to those who are making interesting projects – I definitely want to do it all, to be a part of beautiful stories that are waiting to be told. Mr Gajendra Rao asked me to talk to the media and spread the message that I am back and I want to do better work. So, whatever it takes… I am all game now!