Several social media users are sharing the wedding reception invite of Rishi Kapoor and Neetu Kapoor who got married in January 1980.

Many throwback photos and never-seen-before clips of actor Rishi Kapoor have taken over social media after his demise. The veteran actor passed away on Thursday, April 30 after a year-long battle with cancer at the Sir HN Reliance Foundation Hospital. The popular star was loved by many and celebrated in the industry for his liveliness and zest for life. A rare photo that’s now going viral shows the actor’s wedding reception invite. Also Read - Rishi Kapoor's Daughter Riddhima Kapoor Reaches Mumbai With Daughter Samara Two Days After The Funeral

Rishi married fellow actor Neetu Kapoor in the year 1980 and their wedding reception took place at the famous RK Studios that belonged to the family. The photo of the wedding reception invite mentions showman Raj Kapoor inviting the presence of guests to bless the newlyweds. Take a look at this photo: Also Read - 'Come Back Like How You Did in Karz,' Lata Mangeshkar Once Again Goes Emotional Remembering Rishi Kapoor 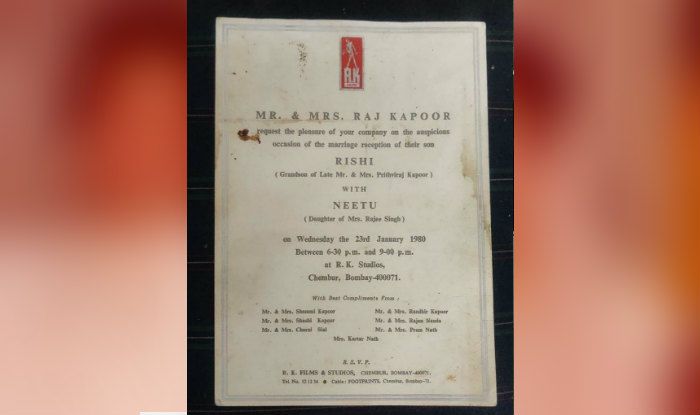 Rishi and Neetu made a much-loved Bollywood couple. After featuring together in many movies, the two decided to take the plunge and got married as per Punjabi wedding rituals in Mumbai. On Saturday, while grieving the demise of her husband, Neetu made a heartbreaking post on Instagram. She shared a never-seen-before photo of the veteran actor with a glass of beer in his hand and wrote ‘end of our story’ in the caption. Also Read - Entertainment News Today, May 3: Rishi Kapoor Had a Cancer Relapse, Reveals His Friend Rakesh Roshan

At the funeral, she was seen being consoled by Alia Bhatt and Rima Jain, Rishi’s sister. Neetu always stood like the strongest support for her husband and was there with him throughout his journey of battling cancer. In his interview with Deccan Chronicle last year, Rishi had credited his recovery and healthier self to Neetu by saying had it been not for her, he would have never recovered from the illness.