Rishi Kapoor's daughter Riddhima Kapoor couldn't attend the funeral on Thursday due to the nationwide lockdown. She reached Mumbai on Saturday with daughter Samara.

Late actor Rishi Kapoor‘s daughter Riddhima Kapoor Sahni reached Mumbai on Saturday night after a two-day-long journey from Delhi. The veteran actor died on Thursday, April 20. Riddhima, who was in Delhi with her in-laws was not given the permission to fly down to Mumbai due to the ongoing nationwide lockdown. She travelled by road with her daughter Samara and reached Mumbai on May 2. The pictures of Riddhima and her daughter have been going viral on social media since last evening. Also Read - Entertainment News Today, May 3: Rishi Kapoor Had a Cancer Relapse, Reveals His Friend Rakesh Roshan

Also Read - 'End of Our Story'! Neetu Kapoor's Emotional Goodbye to Rishi Kapoor Will Bring Tears in Your Eyes

#RiddhimaKapoorSahni with her daughter Samara snapped as they arrive in Mumbai to be with her family post dad #RishiKapoor demise recently, Riddhima with her family travelled via road from #NewDelhi to #mumbai #saturday #RipRishiKapoor #india #manavmanglani

A grieving Riddhima has been making Instagram posts about her late father. In a heartbreaking post, she made on Thursday, she wrote ‘come back papa’ and shared a throwback photo. In another post on Instagram, Riddhima uploaded a family picture and expressed just how much she has been missing those happy days. The popular jewellery designer also wrote about not being able to attend her father’s last rites. 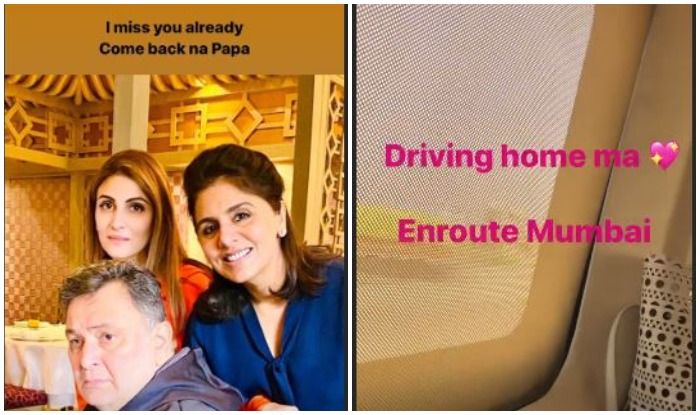 Riddhima couldn’t attend Rishi’s funeral that happened on Thursday evening in the presence of family members and a few close friends. Actor Alia Bhatt, who is considered close to the family, FaceTimed Riddhima and helped her see her father for the one last time.

A post shared by Riddhima Kapoor Sahni (RKS) (@riddhimakapoorsahniofficial) on Apr 30, 2020 at 1:13am PDT

Riddhima is the only daughter of Rishi and Neetu Kapoor. During the actor’s treatment in New York, both Riddhima and her husband Bharat kept making regular visits to him and spent family time together. In her last post on Instagram, she wrote a heartfelt note in the memory of her father. “Papa I love you I will always love you – RIP my strongest warrior I will miss you everyday I will miss your FaceTime calls everyday! I wish I could be there to say goodbye to you ! Until we meet again papa I love you – your Mushk forever ❤️😢” (sic)