Wherever Saif Ali Khan and Kareena Kapoor go, they are asked questions about their little munchkin Taimur Ali Khan. The little Nawaab is everybody’s favourite and his parents just can’t escape any event without discussing him with the media. Same happened with Saif during an interview recently while he was promoting his latest release, Baazaar. The actor was asked a question on using Taimur to promote his films. Saif jokingly answered that it’s not a bad idea saying “let’s sell him…”. Also Read - Kareena Kapoor Khan Motivates People Amid Coronavirus Crisis, Says ‘Stay Strong, We Can And We Will’

In the interview, Saif revealed that many producers have pitched to him that having Taimur present during the promotions of his films would give an extra buzz to the projects. Saif explained, “Every producer I am working with has half-jokingly said, ‘Haha can we put him?’ With white in his hair (in contrast to Saif’s look in Baazaar). With Kaalakaandi, they wanted to put rubber bands. In Hunter, they want to put that Naga Sadhu wig on this poor guy…” Also Read - Taimur Learns to Grow Plants With Daddy Saif as Kareena And Family Make Best Use of Quarantine Time - See Viral Photos

The actor also revealed that Kareena however, has strictly discouraged the idea. Saif added, “My wife says, ‘Don’t be so cheap. You can’t sell your son (Taimur)’. I am like, ‘Why not? Let’s sell him’. Seriously yaar, he is anyway there on the internet. I am just using this platform to say if anybody has any good nappy ads or anything… at a very reasonable price…it’s not reasonable, it’s quite expensive actually. And, I won’t give him the money also. I’ll give him some cash for his education, I am already giving it to him. And I’ll spend the rest!” He then added if Taimur starts working, he would spend the earned money on “holidays in Switzerland”. 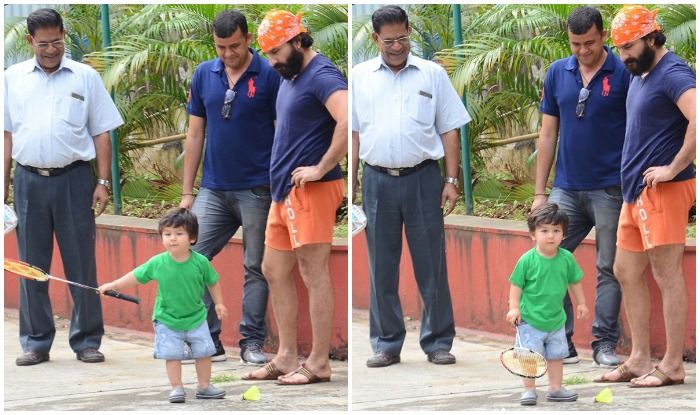 All this was said in a jest, mocking the entire idea of using a baby for film promotions. Saif later expressed what he really thinks of Taimur getting so much attention from all the corners in the country. As reported by IANS, he said, “Media’s constant attention to him does not really bother me, but it would be better if it was not there. If the media likes it, people like it, I am okay with it; but I won’t be interested in someone else’s kids so much. On one level, it is nice that he makes people laugh and smile; but on another level, why is so much attention given to a kid? Why are we so interested in a little kid so much? I don’t understand it”.

He talked about parenting and said, “Our job is to keep him balanced. I think Indian parents like us, like my parents, have a slightly tough time trying to put good moral values and basic family values into kids who grow up with too much attention. And it is possible. So, we hope that he is going to grow up fine and we’re very conscious of it”.

Well, all we know is we love Taimur!