Former actor Sana Khan shared a glimpse of her first month’s wedding anniversary gift given to her by her husband, Maulana Anas. Taking to Instagram stories, she flaunted her new phone as she unboxed it to give a sneak peek to her fans. She captioned it, “Thank you @anas_saiyad20 One month of being together. My gift to u is udhar ok.”Also Read - Vicky-Katrina Marriage Latest Updates: Vicky Kaushal And Katrina Kaif To Go For Court Marriage In Mumbai, All You Need To Know | Watch Video

Sana, who married Anas on November 21 this year, has been in the headlines after reports emerged that she married him as a rebound. She has been in a relationship with dance-choreographer Melvin Louis for a while before they called it quit earlier this year. Also Read - EXCLUSIVE: Sahher Bambba On Her Upcoming Web Series Dil Bekaraar And Her Journey | Watch Video 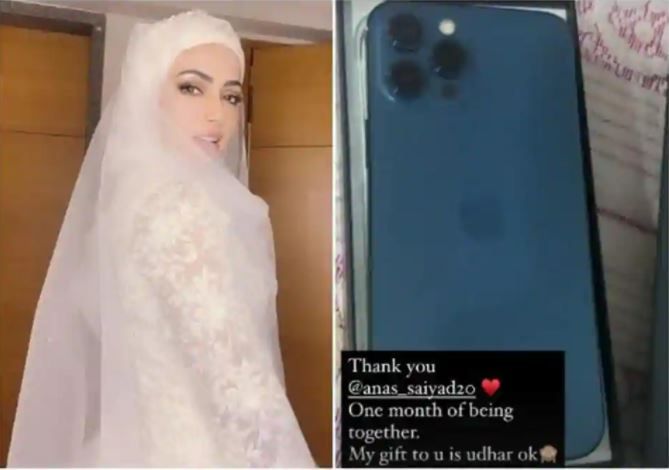 Opening about her decision to marry Anas, she told Times of India, “Getting married to Anas wasn’t an overnight decision. I have prayed for years for a man like him in my life. What I liked best about him is that he is shareef and unn mein haya hai. He is not judgmental. He had said this to me, ‘Agar koi achhi cheez gutter mein gir gayi hai toh uske upar aap 10 baalti bhi paani daal do, woh saaf nahi hoti hai. Par aap usko gutter se baahar nikaal kar ek glass paani daal do, woh saaf ho jaati hai’ (If something falls in the gutter, you cannot clean it even with 10 buckets of water.. But when you take it out, it can be cleaned with one glass of water). That had a lasting impact on me.” Also Read - Rakhi Sawant Birthday: Rakhi Sawant Turns 43 Today, Top 5 Controversies Of Rakhi Sawant That Shook Bollywood Industry | Watch Video

Anas also said, “I have never forced her to lead life in a certain way. She announced on Instagram around six months ago that she has taken hijab. People thought that it’s because of the pandemic and no work, but she always wanted to detach herself from what she was doing. I wanted her to give it some time, but she was certain. In fact, I was shocked, too, when she announced that she was quitting the industry.”

Post-wedding, the couple for Kashmir for their honeymoon.