Alia Bhatt, Aditya Roy Kapur, and Sanjay Dutt starrer Sadak 2 released on Disney+Hotstar on August 28. However, the film did not receive a good response, basically due to the ongoing nepotism debate post Sushant Singh Rajput’s death. Now, IMDb has rated the movie lowest and the film stands at 1.0 on the website. Mahesh Bhatt directorial film has become the lowest-rated movie of all time on IMDb. The film is also a part of the movie rating list of Bottom 250.Also Read - Alia Bhatt-Ranbir Kapoor's Wedding Postponed Yet Again By Over An Year, Here's Why 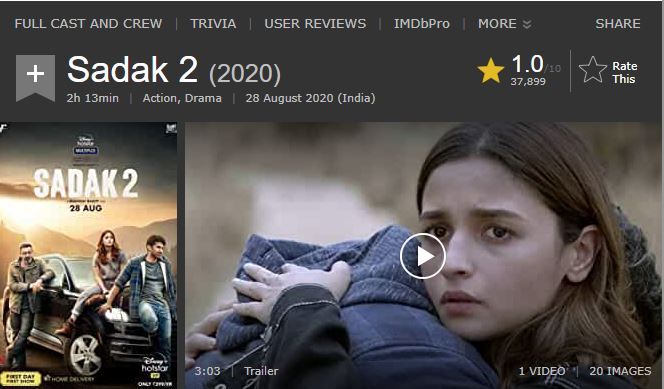 Earlier, when the trailer of Sadak 2 released, it turned out to become the third most-disliked trailer on YouTube. It received 12 million dislikes till now in comparison to 707K likes. The makers also released songs of the film but even the tracks received a similar kind of response.  As per the Republic TV report, Sadak 2 received 36, 123 votes. Also Read - ‘Flashes Of Time’! Some Unseen Pictures Of Amitabh Bachchan-Ranbir Kapoor From Sets Of Brahmastra

Sadak 2 is a sequel to 1991 film Sadak starring Pooja Bhatt and Sanjay Dutt. The sequel also features Pooja Bhatt in an important role. The film will be released on August 28 on Disney+Hotstar. Speaking about the OTT release, producer Mukesh Bhatt told PTI, “I am compelled to come (on digital platform) because I don’t see any light in the near future. This is the best I can do to survive. There are certain things that you do, not out of choice but out of compulsion. This is the only option left. It is a no-brainer.” The film also marks the directorial comeback of Mahesh Bhatt after 20 years.