Shahid Kapoor, Mira Kapoor And Misha Kapoor’s Outing Pictures Are All About Pouts And Fun, Check

It is family time for Shahid Kapoor, Mira Kapoor and Misha Kapoor

Shahid Kapoor and Mira Rajput are proud parents of two, Misha Kapoor and Zain Kapoor. They welcomed their second child Zain on September 5. On November 9, Mira shared a picture of their second born on Instagram and captioned it, “Hello World.” Shahid is a family man and he makes sure that he gives enough time to his family. At the same time, he manages his work really well and continues to impress the audience with his films. Recently, the 37-year-old actor shared several adorable pictures of himself with wife Mira and daughter Misha on his Instagram page giving some glimpses from their outing. Also Read - Found Myself Little More! Shahid Kapoor's Wish For Wifey Mira Kapoor on Their Wedding Anniversary is Pure Love

In one of the pictures, the trio looks absolutely cute while pouting together. He captioned the selfie as “Fam Time.” In another picture, Shahid and Mira can be seen sporting shades and posing for a happy sun-kissed selfie together. He captioned the post as, “Lover.” The duo definitely never fails to give some major couple goals and the two never shy away from expressing their love for each other publically. Also Read - Mira Rajput Kapoor Reminds Shahid Kapoor That ‘Three Golden Words Are I Am Sorry’ in Romantic Anniversary Note 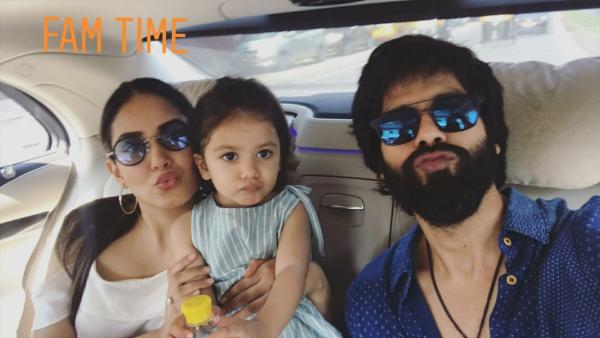 The couple announced in April that they are expecting their second kid by posting a picture of Misha with a message ‘Big sister’ written in the background. Also Read - ‘To The Bestest Baba, We Love You’: Mira Kapoor Wishes Dad Pankaj Kapur on His Birthday

On the work front, Shahid was last seen in Batti Gul Meter Chalu opposite Shraddha Kapoor. He will next be seen in Kabir Singh, which is the Hindi remake of Telugu hit Arjun Reddy. For the movie, he is growing his beard to get into the skin of the role. He will be seen alongside Kiara Advani in it. The film will release on June 21 next year.

Shahid Kapoor married Mira Rajput in July 2016 and they Misha was born to them in August 2016.