Shatrughan Sinha says that he appreciates Mia Khalifa, Rihanna and Greta Thunberg for their stand over Farmers' Protest. The veteran actor also praises his daughter Sonakshi Sinha for not getting 'pressurised to tweet like other Bollywood stars'.

Actor Shatrughan Sinha has spoken out on the Twitter brigade from Bollywood that launched back-to-back tweets a night after international pop icon Rihanna tweeted to comment on ongoing farmers’ protest. The former BJP leader praised his daughter, Bollywood actor Sonakshi Sinha, for standing up for the farmers and not being ‘pressurised’ to tweet with the hashtag #IndiaTogether and #IndiaAgainst Farmers. Also Read - Kangana Ranaut Threatens Twitter After it Deletes Her Tweet Calling Cricketers 'Dog'

The Congress leader was speaking to news channel NDTV when he made a startling statement and said that even his daughter was pressurised. He questioned the ‘identical tweets’ made by Bollywood celebs over farmers’ protest and asked ‘Are these people under duress? Is there a fear-factor?’ Also Read - Akshay Kumar-Saina Nehwal's 'Propaganda' Tweet Are Copied Word-to-Word, Too Much For 'India Together'?

Sinha was quoted as saying, “Several people made identical tweets. What was the hurry? Many others didn’t tweet like my daughter Sonakshi Sinha who was also pressurised.” Also Read - Akshay Kumar, Ajay Devgn And Others Support Centre After Rihanna's Tweet Over Farmers' Protest 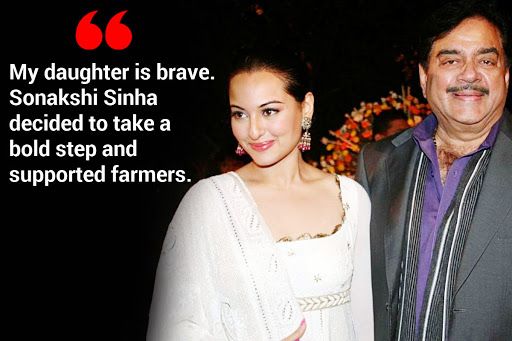 The veteran Bollywood actor further said that he stands with the international stars who spoke on the matter and brought the world’s focus to the issue. Taking former adult movie star Mia Khalifa’s name, Shatrughan Sinha said, “I appreciate Mia Khalifa, Rihanna, and Greta Thunberg for speaking out. If these people can come out to speak for the farmers, they should be encouraged. It is nothing against the nation. When our own PM goes to America and says ‘abki baar Trump sarkaar‘, then he’s also speaking on the matters related to their country.”

Showering her daughter with more praises, Sinha said, “My daughter is brave. Sonakshi took a bold step and decided to support farmers. Justice should be given because they deserve justice.”

On Wednesday, several Bollywood stars including Akshay Kumar, Ajay Devgn, Karan Johar, Suniel Shetty and others took to Twitter to ask the countrymen to stay warned against the ‘international propaganda’. Even the famous sportspersons including Sachin Tendulkar and Saina Nehwal posted with the two hashtags seen in all the celebrity tweets.