Siddhant Chaturvedi is in no mood to stop pulling Ananya Panday's leg even on Karan Johar's kids Roohi-Yash Johar's birthday and THIS aww-dorable picture is proof!

Remember the latest episode of Newcomers Roundtable 2019’ with actors Tara Sutaria, Vishal Jethwa, Ananya Panday, Siddhant Chaturvedi, Geetika Vidya Ohlyan, Abhimanyu Dassani and Saloni Batra? For the uninitiated, the candid conversation hosted by film critic Rajeev Masand broke the Internet for its savagery courtesy Gully Boy star Siddhant Chaturvedi. The discussion on nepotism made Pati, Patni Aur Woh star Ananya Pandey reveal that she is grateful for the opportunities she had received in the industry due to her father Chunkey Pandey and said that she often overcompensates for the same given that everyone has their own struggles. Also Read - '365 Days' Star Michele Morrone Likely To Make Bollywood Debut With Karan Johar? Deets Inside

Quick to respond, Ananya commented, “Aunty…(sic)” with a tears of laughter emoji and fans could help but end up in splits too. Also Read - Kartik Aaryan Now Gets Ousted From Aanand L Rai Gangster Film After Dostana 2, SRK-Backed Freddie

A post shared by Siddhant Chaturvedi (@siddhantchaturvedi) on Feb 7, 2020 at 6:52am PST 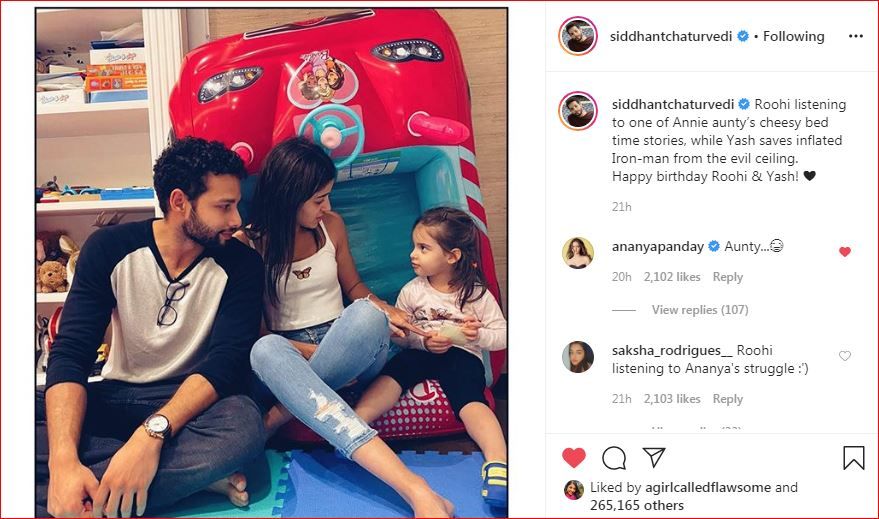 Ananya too shared a slew of pictures with the toddlers flanking her along with a flood of their toys. Her birthday wish for them read, “sitting in a barbie inflatable car while looking for a spider man balloon happy bday Yash and Roohi #Munchkins (sic).”

Three years back, in 2017, Karan welcomed Yash and Roohi via surrogacy. In an interview with a leading news agency earlier, the director talked about how his kids fill the void of having no romantic relationship in life. Karan revealed that he is so much in love with his kids that he no longer feels the need of having someone else in life to love him. The director of successful films like Kuch Kuch Hota Hai, My Name Is Khan and Kabhi Khushi Kabhie Gham among others also talked about how both his kids treat him differently. Karan said while his son comes running to him every time he comes back home, Roohi is a ‘grandmother’s child’ and he has to chase her to get a hug or a kiss.