The makers of Simmba have released the first song of the film, titled ‘Aankh Marey’. It features Ranveer Singh and Sara Ali Khan dancing their heart out on the tunes of the remixed version of the 90s popular song. The original song from the film Tere Mere Sapne featured Arshad Warsi and Priya Gill in the lead. The modified version of the hit track has been sung by Mika Singh and Neka Kakkar. Also Read - Sonu Sood Calls Sara Ali Khan 'Hero' After She Contributes To His Covid-19 Relief Foundation

The three minutes 22 seconds video begins with filmmaker Karan Johar saying ‘Oh God! One more remix’. It then continues to show Sara and Ranveer in their energetic best. Twinning in black, the two show some scintillating dance moves that include some locking-popping moves. Their funny expressions and the way the entire song has been packaged make for an entertaining watch. It also features the Golmaal gang sans Ajay Devgn. There are Tusshar Kapoor, Shreyas Talpade and Kunal Kemmu performing the signature Golmaal step with Ranveer and Sara. Check out the video here: Also Read - Mahek Chahal Breaks Silence on Breaking up With Ashmit Patel: He Wasn't Right For me

What adds more excitement to the video is the use of some brilliant lighting. The dingy mood of the location fits in a perfect contrast to the colourful dancing the couple is doing in Aankh Marey. Sara, especially, looks fantastic and at some places, even overshadows Ranveer’s terrific energy. We are absolutely loving this new remix! 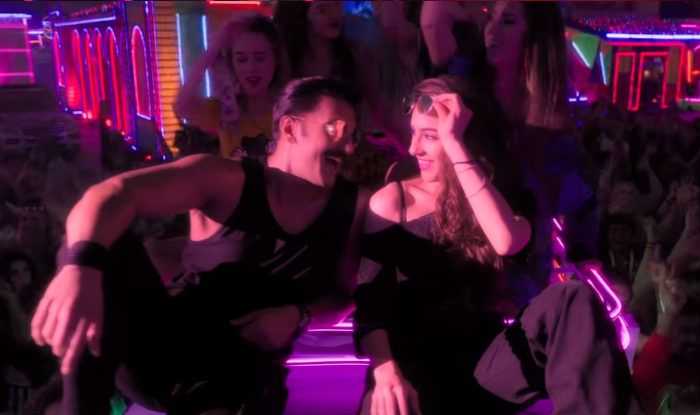 Meanwhile, for all those who are thinking about this abrupt-turned-amazing pairing of the Simmba couple with the team of Golmaal, here’s an interesting anecdote. Both the films are directed by Rohit Shetty and at one point in time, Golmaal 4 was being shot at the same studio where the team of Simmba just began filming. Therefore, just to add more fun, Shetty decided to club the artists of his two films… things only this director can do! Your thoughts about the song though?