Sonakshi Sinha Poses With Vicky Kaushal, Reveals The Kind of Man She Would Accept as Her Life Partner

Sonakshi Sinha might be away from the screen for long, but her presence in the fashion world has been regular. The actress, who recently finished shooting for her upcoming film Kalank, has featured on the cover of a magazine. She has posed with actor Vicky Kaushal for a popular bridal magazine, looking extremely stunning. Sonakshi’s look on the cover seems raw and edgy as she has kept her hair curly and big with those paused expressions on the face. In her interview to the magazine, Sonakshi has spilled the beans on the kind of man she would accept as her life partner, the amazing actor that Vicky Kaushal is, and more. Also Read - Sonakshi Sinha’s Father Shatrughan Sinha And Brother Luv Sinha Wish The Actor Happy Birthday in Adorable Posts

Talking to Brides Today for their November edition, Sonakshi mentioned what’s that one thing she would want in her partner. She said her man would be “Someone who gives me space and never ties me down,” adding that no girl should get married for wrong reasons if she is seeking a life full of happiness and love. Also Read - Vicky Kaushal’s Hilarious Response to Handshakes And High Fives Will Leave You in Splits- Watch 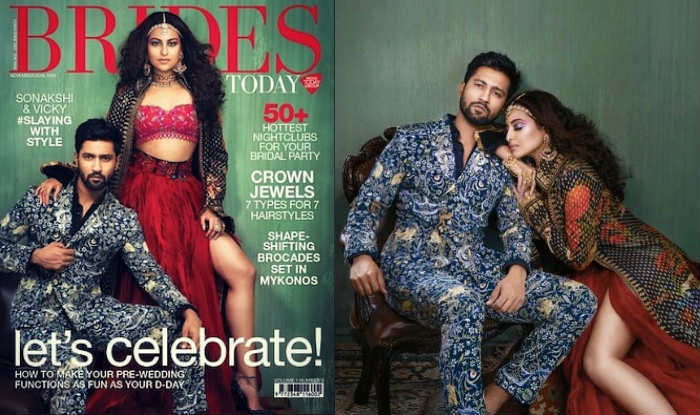 Also Read - Bhuj: The Pride of India New Release Date Out, Ajay Devgn's Film to Hit The Screens on Vijay Diwas in December And Not During Independence Day

Sonakshi also expressed her thoughts about the man she has been featured with on the cover. Talking about Vicky Kaushal, she said, “He is a very talented actor and I would love to work with him in a film”. Sonakshi also revealed that one name she had a crush upon. She said, “The only actor that I ever had a crush on was Hrithik Roshan because of Kaho Naa… Pyaar Hai“. The actress has never worked with Hrithik though.

On the professional front, she has been paired with actor Aditya Roy Kapur in Dharma Productions’ Kalank. The film is a period drama with a big star cast. Apart from Sonakshi and Aditya, the Abhishek Varman-directorial also features Varun Dhawan, Alia Bhatt, Madhuri Dixit and Sanjay Dutt in important roles. Sonakshi’s last on-screen outing remains Happy Phir Bhaag Jayegi, in which she played the titular character. The film also features Jimmi Sheirgill, Jassie Gill and Piyush Mishra in the lead.