Gripping fans in a state of awe with a never-seen-before avatar, Kalank star Sonakshi Sinha added ooze to oomph as she unleashed her sensuous side. With her latest picture on Instagram as proof, Sonakshi set temperatures soaring across the Internet and fans can’t stop gushing. Also Read - Mumbai Police Arrests Man From Aurangabad For Abusing Sonakshi Sinha on Social Media, Actor Asks Fans to Speak up

In the shared picture, Sonakshi can be seen in a monochromic look with a sepia filter, donning a backless dress with her hands pulling back her luscious tresses. Peeping from the space between her arm, Sonakshi’s perfect wing-eyeliner and the sexy black dress made fans heartbeat accelerate. She captioned the hot picture as, “Darling im a nightmare… dressed like a daydream” (sic). Also Read - Sonakshi Sinha Takes a Cheeky Dig at Kangana Ranaut-Rangoli Chandel For Starting Nepotism Debate

However, it was Katrina Kaif’s reaction on the picture that had fans confused. The Bharat actress commented with the tears-of-laughter emojis on Sonakshi’s picture and we wonder if the caption had her in splits. 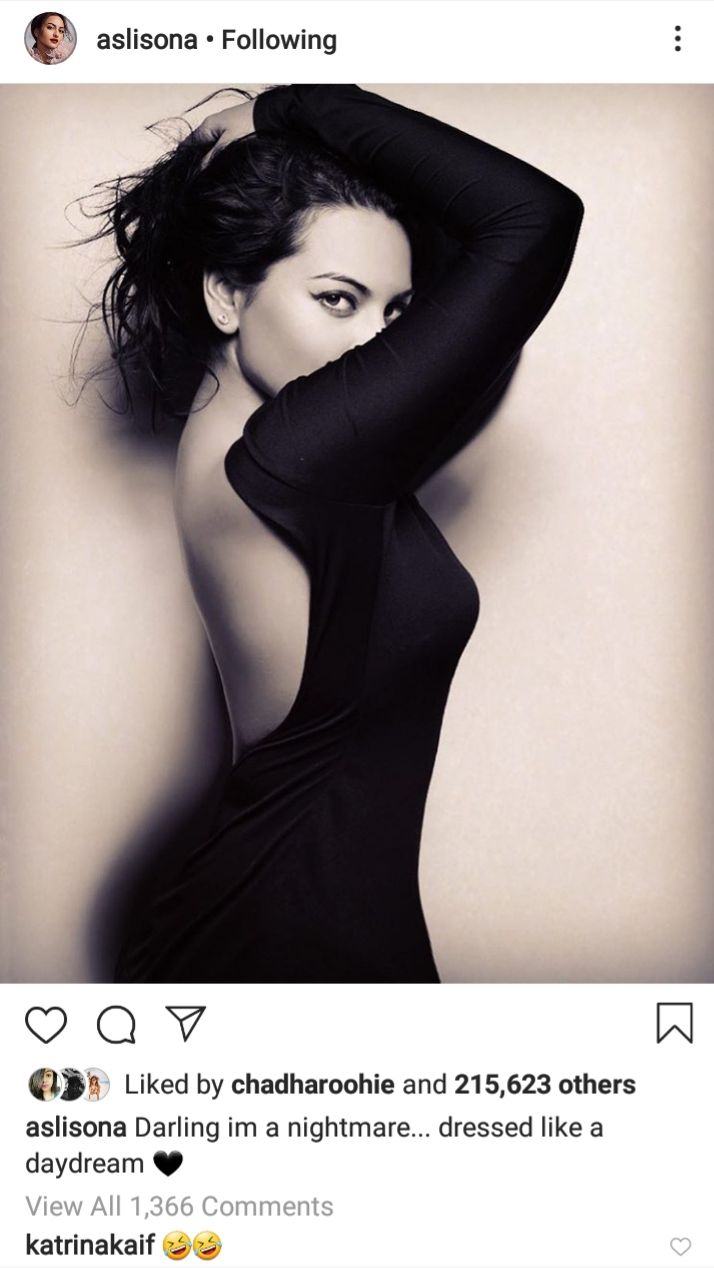 On the professional front, Sonakshi is gearing up for her upcoming movie, Dabangg 3, opposite superstar Salman Khan. Earlier, Sonakshi had shared a new still from the sets of Dabangg 3 where she can be seen donning the character of Rajjo Pandey, wife of Chulbul Pandey, once again in the film. Sonakshi shared a glimpse of her wet eyes as she shot for an emotional scene in the Prabhudeva directorial. Another image that was visible in her Instagram stories gave a glimpse of her vanity van on which her character name – Rajjo Pandey, shone bright on the door of the vanity.

Apart from Dabangg 3, she also has Mission Mangal and Bhuj: The Pride of India in her kitty. Her latest release – Kalank, failed to perform at the Box Office. Sona played the character of Satya Chaudhary in the Dharma Productions film that was directed by Abhishek Varman.