Sonali Bendre on Fighting Cancer, Defeating Death, And Getting Love Will Drive You When You’re Feeling Weakest in Life

In her latest interview, Sonali Bendre says that she was ready to perform her share of struggle when she heard about cancer and death could never scare her.

Each day is a struggle and each day brings more strength to perform that struggle. Actor Sonali Bendre has been showing us that she’s the living proof of the same. Ever since she has been diagnosed with cancer, Sonali has vowed to not let anything dull her shine. In fact, she leaves no opportunity to inspire other women and tell other people battling cancer that they belong to life. She has done the same with her latest magazine photoshoot. In her interview with the magazine, Sonali has opened up on how life is teaching her beautiful things every day and she wants to share this spirit with those who are disappointed in life.Also Read - Sonali Bendre Shares Strong Post on Cancer Survivors Day, Says 'I Didn't Let C Word Define My Life'

Sonali has shared how ‘shattered’ she was when she got to know about the chances of her survival. The actor told Harper’s Bazaar India, ” So when my PET (Positron Emission Tomography) scan showed up cancer spread all over my abdomen, like fairy lights scattered all over, and when the doctor in New York said that there was about 30 per cent chance of it all going away, we were shattered.” Also Read - Bollywood Celebs And Their Happy New Year 2021: Who's Celebrating Where

Despite all the new challenges she could see collectively lying in front of her, Sonali revealed that she never thought she would succumb to the disease. She added, “But the thought of death didn’t come to me. I thought this was going to be a long struggle, but I never thought I’d die.” Also Read - Karwa Chauth 2020: Celebrations with Mask On For Kajal Aggarwal, Shilpa Shetty, Sonali Bendre, and Maheep Kapoor 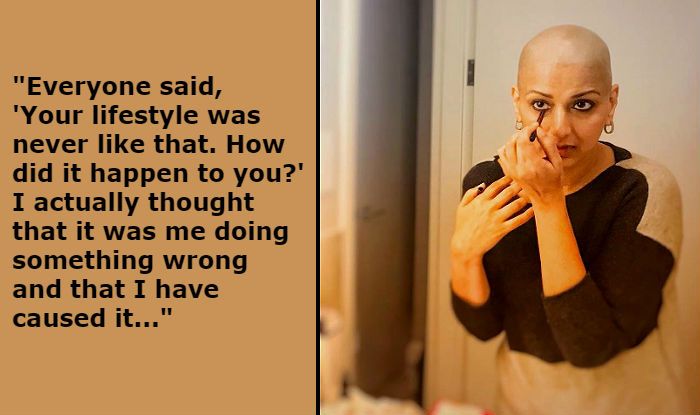 Sonali also said that the best way to recuperate is by acknowledging the love and care you receive from your loved ones. The actor explained that she realised she was getting immense love from people around and all she needed was to derive strength from the same. Sonali said, “I had started listening to my body a lot more attentively now. And it is a new normal, a new journey. I tell women who have gone through cancer that healing from it requires receiving care, receiving support, letting friends and family rally around us. It is my time to receive.”

The actor also shared a BTS video clip of herself getting a hair makeover. She revealed how it was difficult to come to the terms with having short hair but once she started living with it, there was no looking back. Sonali’s post read, “Took me a while to get used to having little hair. But once that set in, there was no looking back (literally!) 😄 It has been months since I’ve even needed a ‘trim’. So, during the @bazaarindia shoot when @mickeycontractor said that I needed one, my first thought was, “Really??”. Before I could react, he was all set – armed with an eyebrow scissor, ready to go at it! I couldn’t stop smiling. Never thought I’d get a makeover of sorts like this, but I guess it’s #MyNewNormal.
#SwitchOnTheSunshine #OneDayAtATime” (sic)

Sonali revealed she was diagnosed with metastasized cancer last year. She was being treated for the same in New York. Earlier, in an interview with News18, she credited her husband, producer Goldie Behl, for her better health. She said that it was her husband who took her to New York for the treatment despite her resistance. Sonali said, “I land in New York and the next day, we go to the doctor. He looks at everything and we had sent all our tests and he says, you know, it is the fourth stage and you have a 30% chance of survival.”

She added, “That really hit me; I just turned to Goldie and I remember saying: ‘Thank God, you got me here’. Goldie always says that ‘tomorrow I’d rather feel I over-reacted, over-spent than under-reacted and have that regret that I should have done that’. There was no time for it and we were not told that it was the fourth stage but Goldie had started reading about it and he was suspecting it.”