Sonam K Ahuja Leaves Fans in Shock After Changing Her Social Media Name to Zoya Solanki, Find Out The Reason Inside

The hint for the curious fans lies in her respective social media bio.

Leaving fans in a state of shock and wonderment, Ek Ladki Ko Dekha Toh Aisa Laga star, Sonam Kapoor changed her name on Friday, across all social media handles of her, from Sonam K Ahuja to Zoya Solanki on Instagram and to Zoya Singh Solanki on Twitter. The hint for the curious fans lies in her respective social media bio.Also Read - Inside Sonam Kapoor's Intimate London Home: Filled With Art, Jewel-Tone Decor With Distinct Indian Touches

While her Instagram bio now reads, “Lucky Mascot,” her bio on her Twitter handle reads, “Lucky mascot of the Indian cricket team.” In case, you still cannot guess, the reason has a direct connection with Sonam’s upcoming movie, The Zoya Factor in which she will be starring opposite Dulquer Salman. In the film, Sonam will be essaying the role of the protagonist, Zoya Singh Solanki, a client services representative who unintentionally becomes the mascot for the Indian cricket team because she was born at the exact moment when India won the first World Cup in 1983. On the other hand, Dulquer will be essaying the role of Indian skipper Nikhil Khoda, captain of the Indian cricket team, who does not believe in luck and is sceptical of Zoya while the rest of the country and players of the team consider her their lucky mascot but what starts as a cold war between the two, turns into a romance soon. Also Read - Arjun Kapoor Shares Unseen Pictures From Rhea Kapoor's Wedding To Mark Raksha Bandhan 2021 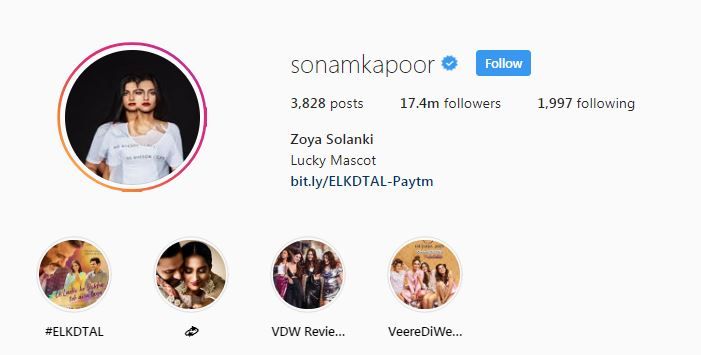 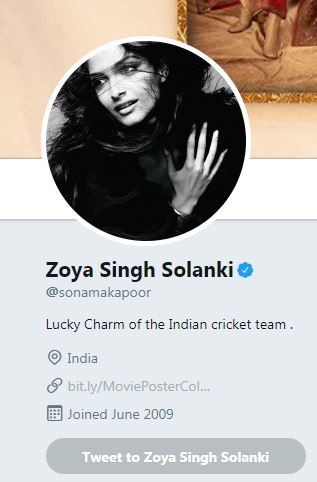 The changing of her real name, on social media accounts, to that of her character is a marketing move by Sonam for promotional activities. The makers opted for this innovative and out-of-the-box approach to familiarise Sonam’s character in the film with her fans. Also Read - Khushi Kapoor is 'Blutiful' in Rs 95K Chic Blue Crop Top And Lehenga For Antara Marwah’s Baby Shower

The film will be helmed by filmmaker Abhishek Sharma and is an adaptation of author Anuja Chauhan’s 2008 bestselling fiction, by the same name, and Aarti and Pooja Shetty are collaborating with Fox Star Studios to bring the best selling novel on screen. Also starring Sikander Kher and Sanjay Kapoor, the movie is slated to hit screens on 5 April.