Sooryavanshi Poster Has Ajay Devgn as Singham And Ranveer Singh as Simmba Behind Akshay Kumar, we Are Sure You Missed to Notice This Before

Thank us later for this!

Akshay Kumar and Rohit Shetty have shared the first posters of their upcoming film Sooryavanshi. The internet is abuzz about the new posters and how good Akshay is looking in his cop avatar. But, there’s something that most of us might have missed in the first look. Sooryavanshi is not alone in the film. He is having the company of both the other celebrated cops created by Rohit – Singham and Simmba. Also Read - Akshay Kumar is Back Home After Recovering From COVID-19, Reveals Twinkle Khanna With Quirky Post

While sharing the posters in the morning today, on March 5, Ajay Devgn wrote this: “A Bullet for a Bullet…
He’s not alone… #Sooryavanshi” (sic). Here’s the tweet: Also Read - The Big Bull Leaked Online, Full HD Available For Free Download Online on Tamilrockers and Other Torrent Sites

A Bullet for a Bullet…
He’s not alone… #Sooryavanshi@akshaykumar #RohitShetty @karanjohar @RelianceEnt @RSPicturez @DharmaMovies #CapeOfGoodFilms pic.twitter.com/DSjiwNMbbk Also Read - Sooryavanshi Box Office: Why January Release Like Master Was Better, And How OTT is Not an Option Anymore

Now, look closely and you’ll find that Sooryavanshi is indeed not alone but has the support of Singham on his right and Simmba on his left. The two names are shining brightly on the cars behind Veer Sooryavanshi. See this: 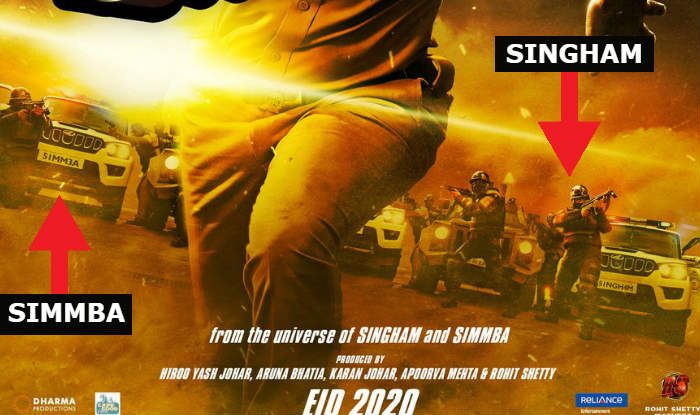 Singham and Simmba in Sooryavanshi’s poster

This adds more excitement to the already escalated buzz around the film. Fans went gaga over the scene from Simmba in which Ajay Devgn comes to the rescue of Ranveer Singh. Now, the glimpse of the two characters in the posters is proof that Sooryavanshi’s swag has multiplied thrice to promise more entertainment and more action on screen.

Meanwhile, in an interview recently, Rohit Shetty agreed that he is working towards building a kind of cinema genre which will be about both content and numbers. The director said that he wants to acknowledge the true heroes of the country – police in his films and therefore, he is sincerely working on cop-series.

Sooryavanshi is expected to go on floors in mid-2019. The lead actress of the film is yet to be finalised. All three films in Rohit’s cop-series have been tremendously successful at the Box Office. The audience have given a thumbs up to both cop characters created by the director – Singham and Simmba. Now, after having Akshay on board, Rohit seems to have announced that the excitement is only going to get bigger for his cop dramas. The film is produced by Karan Johar’s Dharma Productions.