After Salman Khan’s appeal to fans to support Sushant Singh Rajput’s family, his brother Arbaaz Khan has slammed haters for spreading negativity. He called out ‘idle minds’  for spreading hare. Taking to Twitter, he shared a proverb learned from school and confesses that he understands its deep meaning now. He tweeted, “An Idle Mind is the Devil’s Workshop. “An English Proverb taught us in school. I was too young to understand the deeper meaning of it then, but looking at what’s happening all around us, the old proverb makes a whole lot of sense.” (sic) Also Read - Sushant Singh Rajput's Family Hosts Prayer Meet For The Late Actor, Pictures Go Viral

However, the producer and actor did not take any names and did not reveal if it was directed to hate on social media or for certain people, who are taking a jibe at Salman Khan and family. Also Read - Sushant Singh Rajput Suicide Case: Actor's Close Friend Siddharth Pitani Interrogated by Mumbai Police 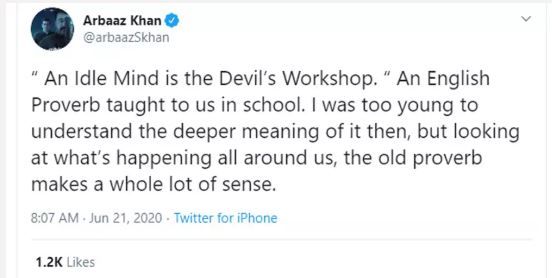 “ An Idle Mind is the Devil’s Workshop. “ An English Proverb taught to us in school. I was too young to understand the deeper meaning of it then, but looking at what’s happening all around us, the old proverb makes a whole lot of sense.

Apart from their name dragged in Sushant Singh Rajput’s suicide case, director Abhinav Kashyap wrote an open letter and accused the family of sabotaging his career. He even claimed that Salman’s charity foundation and Being Human brand is only to clean the actor’s image and to ‘launder money’.

Earlier, Salman tweeted, “A request to all my fans to stand with Sushant’s fans n not to go by the language and the curses used but to go with the emotion behind it. Pls support n stand by his family n fans as the loss of a loved one is extremely painful.”

As per the latest reports by Hindustan Times, Arbaaz Khan will be taken a legal route in Abhinav Kashyap’s case. He was quoted as saying, “We have taken legal action and have also complained to the film association. We would like to go that way, not interested in fighting this any other way… We are doing what we think is the best way to address this.”