This is The Reason Why Sushant Singh Rajput's Family is Not Demanding CBI probe.

Sushant Singh Rajput’s sister Shweta Singh Kirti has finally revealed why the family is not demanding CBI investigation into the death of her brother. Responding to the actor’s fan, who encouraged her to ‘fight for truth’ and seek a CBI probe into the matter. The fan further requested Shweta and family to request for a CBI investigation. Responding to the fan she wrote, “We were waiting for Mumbai police to finish the investigation and come up with their reports.”Also Read - Sushant Singh Rajput Case Update: Actor's Father Files FIR Against Rhea Chakraborty in Patna Police Station 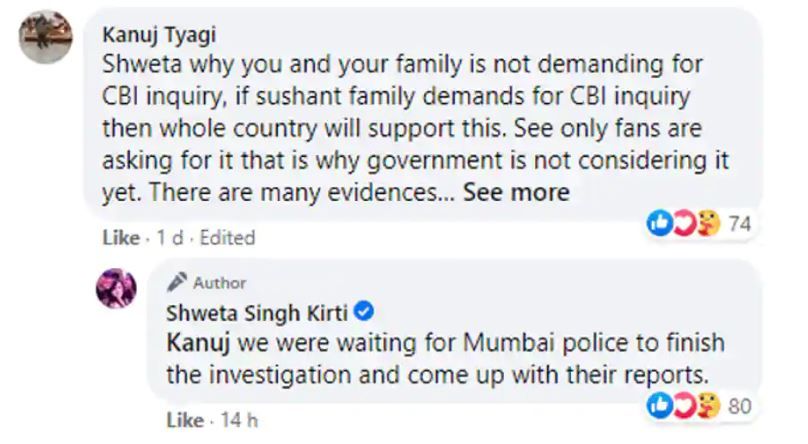 On Tuesday, Sushant Singh Rajput’s father has filed an FIR against late actor’s girlfriend Rhea Chakraborty under various sections, including abetment of suicide at Patna’s Rajivnagar Police Station. In the six-page complaint, he has alleged Rhea of breaching Sushant’s trust, cheating him, driving him to commit suicide. He has also claimed that Rhea threatened Sushant of revealing the details of his mental illness to the media. He further stated in the complaint that Rhea used Sushant’s success as a ladder to propel her Bollywood career. He also mentioned in the FIR that Rhea had access to Sushant’s credit card and used it to exploit Sushant financially. Also Read - Swastika Mukherjee Opens up on Me Too Rumours Against Sushant Singh Rajput, Says 'Never Saw Sanjana Sanghi Feeling Uncomfortable'

He also alleged that Rhea intentionally compelled Sushant to feel depressed and forced him to take wrong medicines for mental illness. He also accused Rhea of threatening Sushant’s career by making public the reports of his mental illness. As per the FIR, Sushant’s father claimed that Rhea changed his son’s mobile number so that his family could not connect with him.

Meanwhile, four officers from Bihar has left for Mumbai as soon as the FIR was registered.