Sushant Singh Rajput's sister Shweta Singh Kirti took to Facebook to make a post thanking fans and well-wishers for the love they gave to the late actor's family all these days.

Late actor Sushant Singh Rajput‘s sister Shweta Singh Kirti took to Facebook on Sunday to thank fans and admirers of her brother. She wished the best to those remembering Sushant and mentioned that the family is grateful for getting so much love from across the country. Shweta mentioned that the prayers, wishes and constant faith in God will get justice to the departed soul. Also Read - Shashank Director Submits Affidavit in Response to Sushant Singh Rajput's Father Petition, Says 'Film is Not Based on SSR'

Sweta’s Facebook post read, “I am overwhelmed with gratitude for the kind of love and support you guys have shown…. I can’t thank you guys enough for giving our family strength & caring for us during this difficult time. Let’s have faith on God and his justice…. keep praying.” (sic) Also Read - Sushant Singh Rajput's Father Moves Delhi High Court Against Biopic, HC Issues Notice to Makers 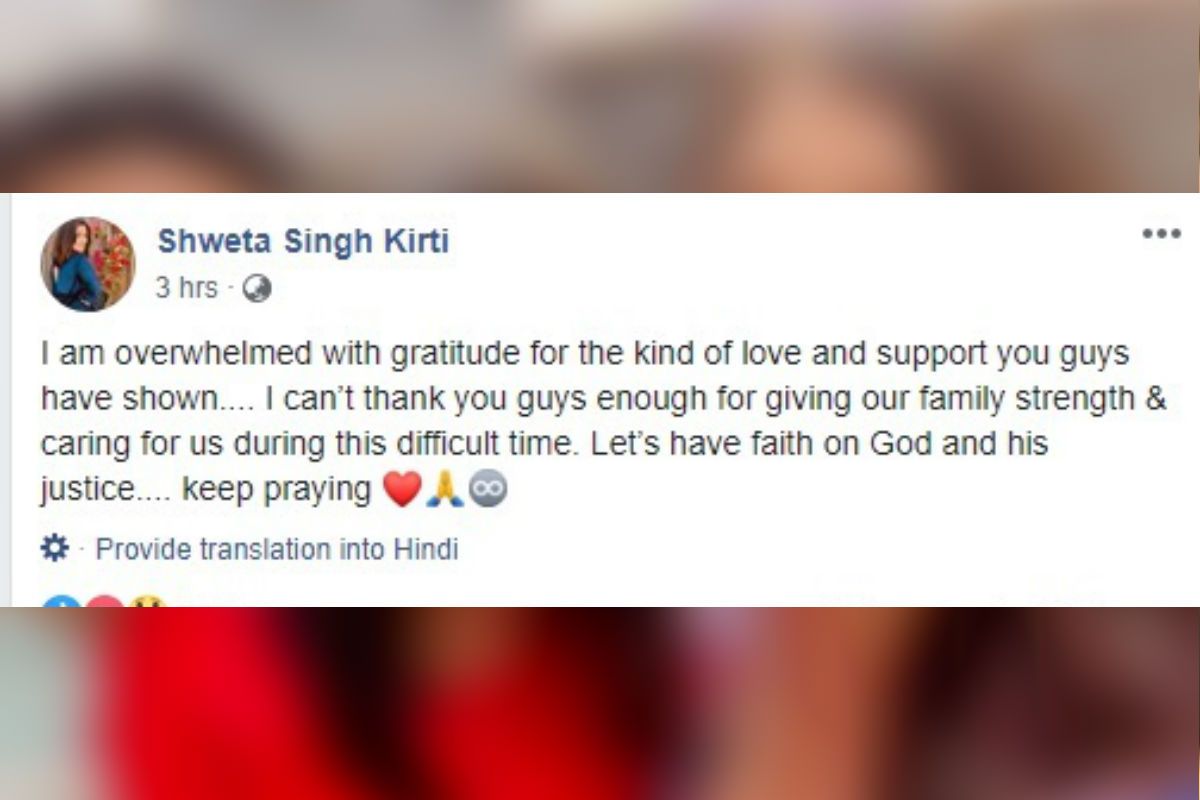 Shweta has been expressing her love for the late brother in various posts on Facebook. She also shared a beautiful photograph of her daughter posing with Sushant recently, along with a picture of a hand-written note her late brother sent to her to show just how much he had loved her and missed her.

Sushant was found hanging to the ceiling fan of his apartment at Bandra’s Mont Blanc building on June 14. It’s going to be a month since he left the world for his heavenly abode. The investigation in the case is still on as Mumbai Police has been recording statements of various people who directly or indirectly were a part of major developments in the late actor’s life including his personal relationships and professional choices.

Meanwhile, Sushant’s brother-in-law, Vishal Kirti recently launched an app called nepometer on Twitter to assess the extent to which a banner can employ people who belong to a film family in the industry. The app was created by his brother Mayuresh Krishna to find out if a film is ‘nepotistic’ or ‘independent’ and when they measured the upcoming film Sadak 2 on it, it came out to be 98 per cent nepotistic.