Actor Kangana Ranaut found herself at the receiving end of backlash after her now-deleted tweet created outrage on social media. Her Twitter account is also temporarily restricted after the controversial tweet. In the tweet, she said that ‘it was time to take their heads off’ for allegedly insulting Hindu gods in the Amazon Prime Video’s web series, Tandav. Replying to the tweet on how people have ‘stopped taking insults lying down’  and made the Information and Broadcasting Ministry sought an explanation, she wrote, “Because even Lord Krishna forgave 99 mistakes of Sheshupala…. pehle Shanti phir Kranti (Silence must be followed by revolution)…. time to take their heads off… Jai Shri Krishan.” However, she deleted the tweet later.Also Read - Shikhar Dhawan Set to Make Bollywood Debut: Report 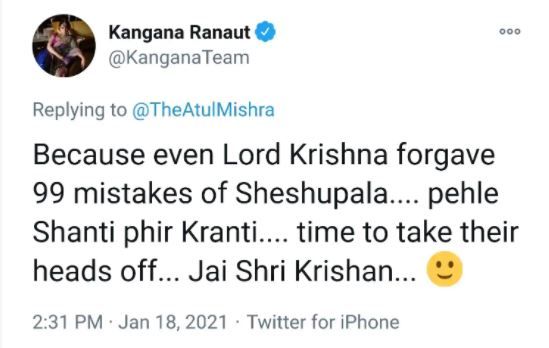 Many netizens criticised her for what they perceived the tweet as instigation of violence towards the team of Tandav. Kangana then defended herself and wrote, “Jo libru dar ke maare mummy ki god mein ro rahe hai, woh yeh padh lein. Maine tumhara sir kaatne ke liye nahi kaha, itna toh main bhi jaanti hoon ki insects ya worms ke liye pesticide chahiye hota hai (The liberals who are scared and crying to their mothers must read this. I did not ask for you to be beheaded. Even I know that insects and worms need pesticide).” Also Read - Video : Stars Who Failed To Impress Audience And Totally Disappeared From Bollywood - Watch List

Most of the tweets of Bollywood actress @KanganaTeam generate hatred in the nation and society. There are spoilers, distributors of social harmony. I appeal to @TwitterIndia to immediately close this handle. #SuspendKanganaRanaut

Is @TwitterIndia your responsibility only applies in America, people of devious mindset will continue to spread hatred in the rest of India, voice is being raised from India, hate ID should be suspended. @_garrywalia
Note: tumhara jeena dushwar karke rahungi#SuspendKanganaRanaut pic.twitter.com/AKz8n5ZobJ

If you spread hate news for your own profit, if you fooled people on the name of nationalism,Y+ security is just for you

Remember Munawar Faruqui is still in jail for a joke which he never made!#SuspendKanganaRanaut pic.twitter.com/SNVD2WZDkV