When asked to comment on the Tanushree-Nana case, Kajol said that the issue of sexual harassment exists in all other industries as well

Tanushree Dutta might not be really happy with the kind of support Bollywood has given to her in the Nana Patekar sexual harassment issue, but that isn’t stopping more and more faces from the industry to speak about the matter. The latest one to join the bandwagon is Kajol. The actress is promoting her upcoming film, Helicopter Eela, these days. At one such promotional event, she was asked to comment on the entire issue and Kajol readily accepted that what Tanushree is speaking about is the reality of the film industry. The actress, however, stayed away from taking any names in her statement and rounded off her reaction to the issue in general. Also Read - Why Karan Johar Never Released Koochie Koochie Hota Hai - Animated Version of K2H2 Despite Dropping Its Trailer

Kajol told NDTV in an interview, “What she speaks about is definitely the reality and I wouldn’t say it’s restricted to our industry. I think it’s pretty much a concern all over, whichever field we talk about. If it had happened in front of me, I’m sure I would have stood up or done something about it”. Also Read - Ajay Devgn And Kajol's Posts For Daughter Nysa on Her 18th Birthday Are Drenched in Pure Love 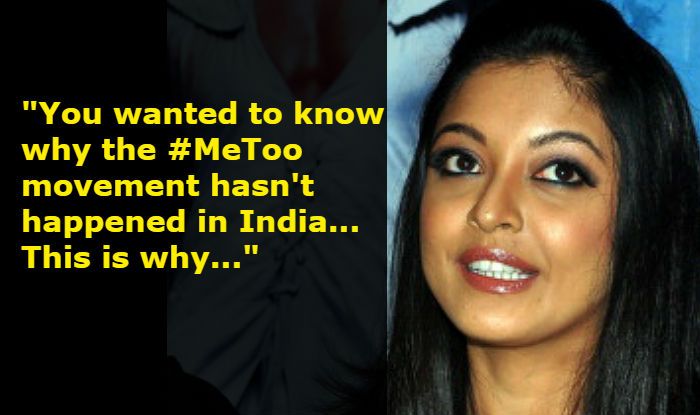 Meanwhile, Tanushree has revealed that she has been slapped by legal notices from both actor Nana Patekar and filmmaker Vivek Agnihotri. In an official statement released thereafter, the actress has mentioned that fighting a court case in India is a tedious task and the efforts get doubled up if the person fighting is a woman. The statement also has her revealing that two suspicious men had tried to enter her house before the security personnel caught them.

Watch out this space to know all the latest update in the case!