Priyanka Chopra reveals an incident that forced her to think about Nick Jonas and how he was the man of her dreams. Read on.

Global stars Priyanka Chopra and Nick Jonas always appear head over heels in love with each other. At many public events and media interaction, Priyanka has opened up on how much Nick matters to her. The actor did the same during her latest appearance at an event. She was speaking at the Women in World Summit 2019 when she narrated an incident about Nick that completely swept her off her feet. Also Read - Priyanka Chopra-Nick Jonas Give Hints of Embracing Parenthood, Are They Planning Baby?

PC revealed that she never found any man in her life who acknowledged her work and credited her for her hardwork and success the way Nick has always done. The incident that she revealed is from their initial days of dating. Priyanka said that they had gone out with a few friends and she had to leave for a meeting. However, she kept dropping hints for Nick to make her cancel the meeting. Priyanka said that instead of telling her to not go away, he actually asked her to leave and fulfill her commitment, telling her that he knows how much of efforts she puts into her work and he will never ask her to put that all behind for him. Here’s how the former Miss World narrated the incident: Also Read - It's a Girl For Anushka Sharma, Virat Kohli! From Alia Bhatt To Sania Mirza, Celebs Pour In Their Congratulations! 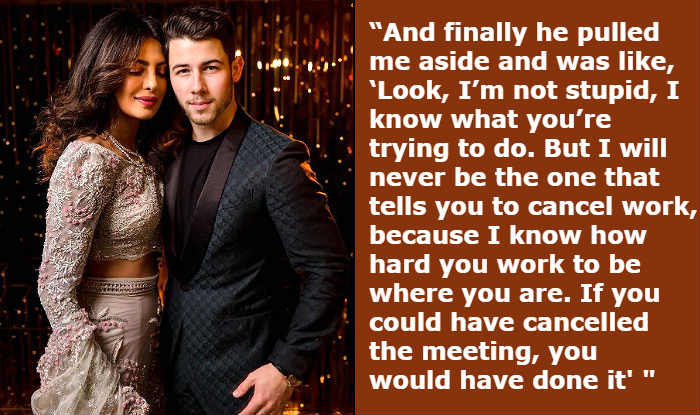 Praising her husband some more, Mrs Jonas said she calls Nick ‘OCJ’ – Old Man Jonas because he is ‘such an old soul, extremely smart and so good’ for her. The actor added that she ‘is a wild child’ and Nick ‘grounds’ her. PC said her husband always supports her and let her do whatever she wants.

Nick and Priyanka got married in two wedding ceremonies – Indian and Christian on December 1 and 2 last year in India.