Actor Tiger Shroff is all geared up to begin shooting for his upcoming films, Heropanti 2 and Baaghi 4. Yes, you heard us Right! The actor has united with Baaghi franchise filmmaker Ahmed Khan and producer Sajid Nadiadwala for both the films. Announcing the news on Twitter, Sajid Nadiadwala shared the picture of the trio and wrote, “#NGEFamily is pleased to announce that our @iTIGERSHROFF is now a part of 2 action franchises Fire With #SajidNadiadwala’s #Heropanti2 going on floors, #Baaghi4 makes it’s way soon! FireTo be directed by @khan_ahmedasas @WardaNadiadwala. (sic)”Also Read - EXCLUSIVE: Karanvir Shama On Upcoming Thriller Film A Thursday And Set Secrets, Reveals What Made Him Say Yes To Project 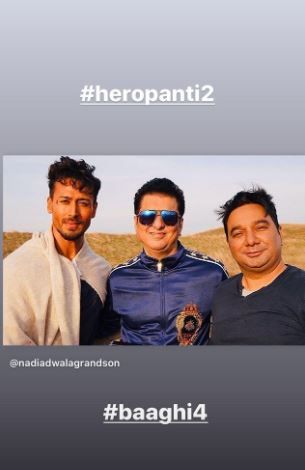 Tiger made his Bollywood debut with Heropanti opposite Kriti Sanon. About the Baaghi franchise, the film has been a blockbuster hit where Tiger essayed the role of Ronnie. Each film has a fresh story and is not related to the previous film. Baaghi 3 starring Tiger Shroff, Shraddha Kapoor, Riteish Deshmukh, and Ankita Lokhande was an action-packed film and minted Rs 90.67 crore amid the coronavirus scare. Also Read - Kota Factory To Asur: Here's A List Of Top 10 Web Series That You Can Binge, Watch Full List

Earlier, Ahmed Khan in interaction with Mumbai Mirror said, “We aren’t taking his original character from Heropanti forward. We are still working on the script and his character and while there will be a lot of action in this one too, it will be very different from the one in the Baaghi series.” Also Read - EXCLUSIVE: Child Actor To Sharing Screen With Salman Khan, Mahima Makwana On How She Became An Actor, Watch

Are you excited for Heropanti 2 and Baaghi 4?