Twinkle Khanna reacted to Aryan Khan's arrest and compared it to one of the games shown in the popular Netflix web series, Squid Game. Read Here.

Mumbai: Shah Rukh Khan’s son Aryan Khan’s lawyer has moved the Bombay High Court against the special NDPS court order after the court rejected his bail plea on Wednesday. Since his arrest, many Bollywood celebrities came out in support of Aryan Khan. Now, Akshay Kumar’s wife and author Twinkle Khanna reacted to his arrest and compared it to one of the games shown in the popular Netflix web series, Squid Game.Also Read - This Is How Twinkle Khanna-Akshay Kumar, Kajol-Ajay Devgn Split Their Bills, Deets Inside

In an Instagram post, she shared a portion of her blog titled, ‘Let the desi Squid Games begin’. Referring to the game of Marbles shown in the show, she wrote, “Each player is given ten marbles and must get their opponent’s marbles by competing in any game of their choosing. In this episode, one of the strongest candidates is badgered and ultimately bamboozled into losing his marbles. I seem to have misplaced mine as well when I read the news about Shah Rukh Khan’s son’s arrest.” Also Read - Idhar Ki Baatein, Udhar Ki Baatein...Kisiko Kuch Nahi Bolte: Juhi Chawla Reveals How Shah Rukh Khan Backtracks On His Word In KKR Team Meetings | WATCH VIDEO

“While his friend was apparently carrying 6 gm of charas, there is reportedly no evidence of possession by Aryan Khan. Yet, the young boy has been languishing in Arthur Road jail for almost two weeks now”, she further added. Also Read - BTS V Surprises ARMY With Squid Game Outfit But Ended Up Hurting His Knee During 'Cool' Gesture

She also imitated a news anchor and wrote, “I suppose I feel like emulating one of Arnab’s dramatic proclamations where he once said, ‘Mujhe drug do, mujhe drugs do,’ because I need some heavy-duty psychotropic substances to make sense of this development.”

Check It Out Here: 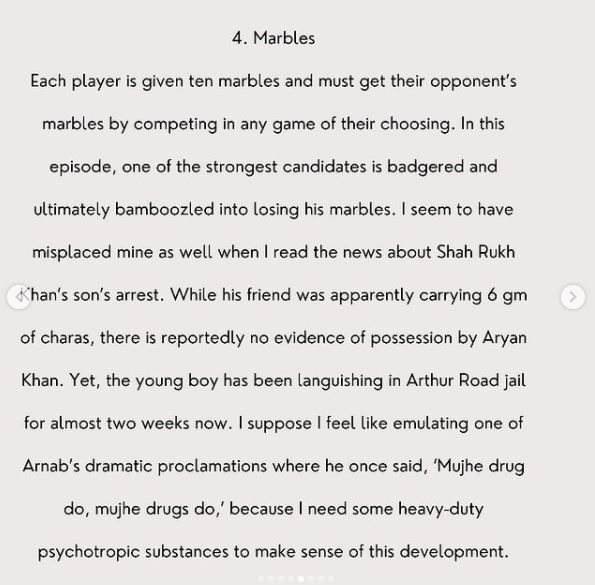 Aryan Khan’s lawyers are expected to plead the Bombay High Court on Thursday to hear his bail plea on an urgent basis. This comes a day after a special Narcotics Drugs and Psychotropic Substances (NDPS) court in Mumbai rejected the bail plea citing that the 23-year-old was indulging in ‘illicit drug activities’ on a regular basis, and could commit an offence if released. On October 2, the NCB busted a rave party in Mumbai and 20 people so far have been arrested in connection with the case including two Nigerian nationals, Delhi-based event management professionals, and Mumbai-based drug peddlers, among others.

While Aryan Khan and Arbaaz Merchant are lodged at Arthur Road Jail, Munmun Dhamecha is lodged at the women’s prison in Byculla.